Starbucks’ mythical drink becomes a reality for a limited time

One of the biggest statements of the season is the rainbow unicorn craze, appearing everywhere from clothes to hair to food and making an exceptionally prevalent appearance at this year’s Coachella festival.

Starbucks officially released its limited time Unicorn Frappucino on April 19 in stores across the U.S., Canada and some parts of Mexico. The Unicorn Frappuccino will be available in participating Starbucks stores until Sunday, April 23.

The coffee chain describes the blended drink as “flavor-changing, color-changing, and totally not-made-up.”

Starbucks describes the drink’s flavors as “made with a sweet dusting of pink powder, blended into a crème Frappuccino with mango syrup and layered with a pleasantly sour blue drizzle.”

What exactly “sour blue” tastes like is unknown, but the company says that it gives the drink a tart taste.

The drink will allegedly change its flavor from sweet to tart the more you mix it, and is supposed to change its color from purple to pink as you sip.

The Unicorn Frappuccino seems like something out of “Willy Wonka” in both its appearance and description, but the true wonder lies in its taste.

Mingtian Zheng, a student pursuing her master’s degree in fine arts, confirmed Starbucks’ claims of the drink changing in color and flavor, at first seeming sweet and then changing to sour once she stirred. She said once she mixed the pink drink it changed to a purple color from the “sour blue.”

Zheng bought the Frappucino with her friend because they wanted a good picture, not for the taste. Before even tasting the drink, she and her friend took pictures with their blended drinks for their Instagram pages.

“I don’t drink coffee, but it looks like it will be too sweet, kind of like unicorn poop,” Zheng said with a laugh. After tasting the drink, she thought it wasn’t as sweet tasting as it looks, since the “sour blue” gives the drink more of a sour tang than a numbing sweetness.

Despite the Unicorn Frappuccino’s tangy taste, many students agree the drink makes for a good picture. The UB Commons Starbucks employees joked they were “creating magic” every time they had to make one.

The drink makes for a great social media post, but might be too sweet for Starbucks’ adult audience.

“I feel like this doesn’t really belong in Starbucks. It seems oriented towards kids, not towards your everyday coffee drinker,” said Sitara Babury, a sophomore business and psychology double major. “[The drink] seems like something you would find in a hipster cafe in New York City, not in a Starbucks in Buffalo.”

Other students were more reluctant to buy the drink, as it looks unnatural in both its colors and flavors, and were concerned for their health.

Stacey Menos, a sophomore psychology and biological sciences double major, was skeptical while purchasing the drink because of its bright colors. She thought it was “too good to be true.”

“I feel like in 10 years there will be a report from Starbucks saying that it causes cancer,” Menos said. “I couldn’t get more than a tall. It’s just so sweet I can’t handle any more than that.”

Despite the drink’s almost overwhelmingly sweet taste, it isn’t dramatically different from other Frappuccino’s on the menu. But as far as a treat for the day, it definitely puts a dent in your calorie count.

The drink’s bright colors and flavors might look almost radioactive, but the only health risk lies in its sugar and calorie content. According to Starbucks’ website, a grande Unicorn Frappuccino has 410 calories and 59 grams of sugar.

Lindsay Gilder is the assistant features editor and can be reached at lindsay.Gilder@ubspectrum.com 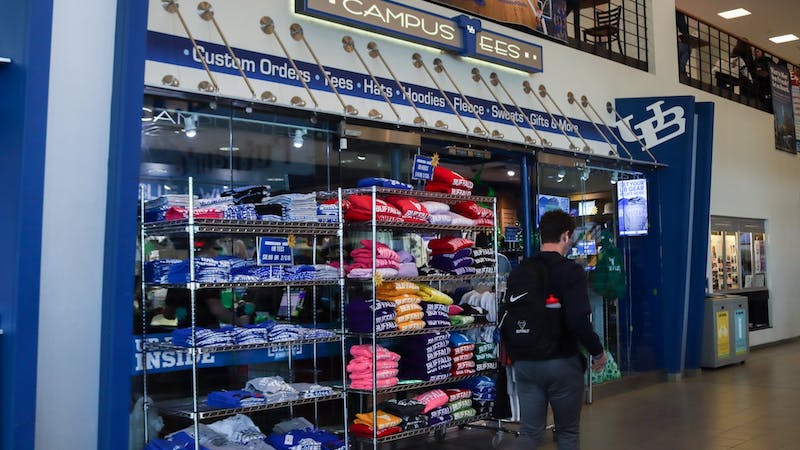 By ELIZABETH NAPOLITANO
4 days ago

By REILLY MULLEN
14 days ago

By Vindhya Burugupalli
18 days ago

By ELIZABETH NAPOLITANO
18 days ago