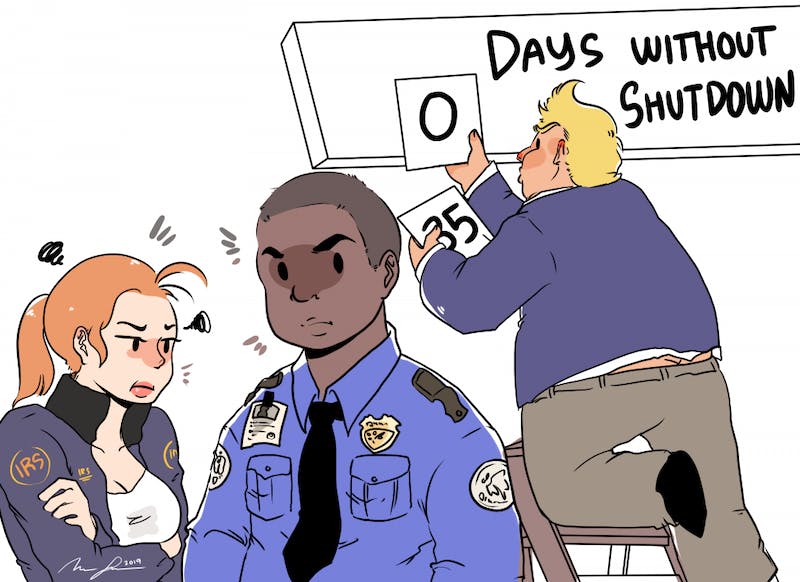 None of the Spectrum editors’ families were majorly affected by the recent government shutdown, the longest in U.S. history.

But we’ve heard the stories.

The shutdown, which halted funding for roughly one quarter of the federal government, lasted 35 days. It impacted roughly 800,000 federal workers, some who live paycheck to paycheck.

And it can happen again. All because of border security.

It’s not worth it.

Some of the workers do thankless and tiresome jobs, like picking up trash at our national parks or ensuring safety at airports. Some of those people received back pay for their work but only after five weeks without pay. Others couldn’t work at all.

Still, thousands of contracted employees, including custodians and security guards at museums in D.C., spent most of December and January working for free.

And most are expected to not receive a single cent in back pay for it.

This is horrible to us and we can’t imagine what this feels like.

We are also disturbed by the increasingly common use of this devastatingly disruptive “nuclear option” by politicians.

The U.S. went 17 years without a shutdown before the October 2013 government shutdown under President Barack Obama. There have been three shutdowns, including two which furloughed (or temporarily laid off) federal workers, under the Trump administration.

In October 2013, the Republican-majority House did not agree with Obama and Democrats on funding for the Affordable Care Act. They also couldn’t find common ground on raising the debt ceiling. The shutdown impacted federal workers for 17 days.

The recent shutdown, which ended Jan. 25, involved politicians disagreeing on funding a southern border wall. Not to mention the shutdown failed to fill President Donald Trump’s intent to have a fully funded, $5.7-billion border wall.

Will politicians continue to impact hundreds of thousands of lives to get their political needs or fulfill their campaign promises?

But it may happen again, as both Republicans and Democrats work toward a resolution on border security before the same portion of the government runs out of funding again on Feb. 15.

While we recognize border security is a political issue, we don’t think it’s worth making 800,000 government workers go without pay for weeks.

The U.S. undocumented immigrant population has decreased from 12.2 million in 2007 to 10.7 million in 2016, according to the Pew Research Center.

There has also been a 93-percent decrease in undetected unlawful border entries at the southwest border between 2006 and 2016, according to the U.S. Department of Homeland Security.

Numbers don’t lie. As one Spectrum editor said, the numbers tell one story, President Trump tells an entirely different one.

His story falls in line with fear, the editor said, a fear that he instilled to get a political victory as he claimed drugs were “pouring into” the United States from Mexico.

Republicans like Senate Majority Leader Mitch McConnell flip-flopped to President Trump’s side in the midst of his fear-based claims. Democrats, led by Senator Chuck Schumer and House Speaker Nancy Pelosi, tried their best to find bipartisan solutions but ultimately disagreed on funding a wall altogether.

At the end of the day, the shutdown cost the U.S. at least $6 billion, according to a recent S&P Global Ratings analysis.

This is more money than President Trump’s proposed $5.7 billion border wall, which never came close to funding after 35 days of political back-and-forth. The nonpartisan Congressional Budget Office reported that the shutdown cost about $11 billion, with at least $3 billion being a permanent loss.

The shutdown was a failure and a stain on Trump’s legacy.

It’s also a failure on our entire political system.

And we’re less than two weeks from it happening all over again.

Now we can only hope Washington comes to its senses and avoids making a “Groundhog Day” out of federal workers’ lives.

The editorial desk can be reached at opinion@ubspectrum.com.