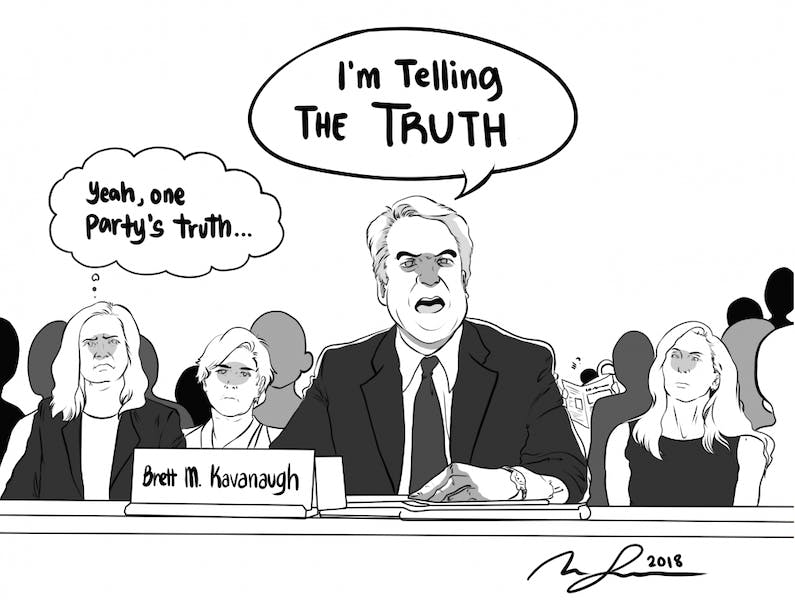 We at The Spectrum are upset with how Kavanaugh’s hearing has panned out. Many of us stand behind the women who have come forward, and many also feel as if the nomination and the hearing are politically charged moves by both parties. We believe students should care about issues like this, regardless of political leaning.

On one end, the hearing seems like an effort for the Democrats to delay Kavanaugh’s appointment for the midterm elections and avoid a republican-controlled Supreme Court. On the other, many Republicans seem to blindly dismiss Kavanaugh’s accusers, avoiding the problems at hand with the judge’s past.

Kavanaugh’s record shows he was a good judge, but his accusations show a different side to him.

The accusations should be heard without political bias. Instead of trying to protect the seat on the court, senators on the Senate Judiciary Committee should have gone into the hearings with an open mind, focusing on accounts from Ford and Kavanaugh.

Both Ford and Kavanaugh testified in front of the committee last week, with senators questioning them both. The hearing was arguably the biggest news of the week and a historic moment, but many senators seemed as if they went into the hearing with predetermined decisions.

Kavanaugh’s hearing seems to be a matter of red versus blue at this point, a centuries-old divide in the American political system. This divide makes it so each senator votes with his or her party on Kavanaugh’s hearing.

Many editors expressed how the two-party system does not really express the ideas of America as a whole, but rather forces people to make quick judgments on situations like Kavanaugh’s, which are more complex than just political leanings or a seat on the Supreme Court.

The two party system doesn’t allow social issues to be discussed, it rather implies they are two-sided arguments. Multiple editors pointed to the idea of having more than two major political parties to allow deeper discussion of tough issues like this one. For many editors, the current American political system from the state level to the national level just mirrors a red vs. blue mentality, giving no room for ideas outside of party lines.

For now, each party seems set on increasing its strength, regardless of which side of the social issue it agrees with or whose story it supports in situations like the Kavanaugh hearing.

The editorial board can be reached at opinion@ubspectrum.com