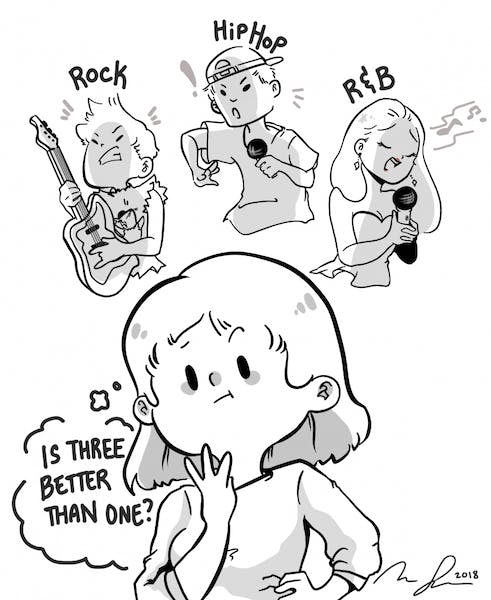 SA’s changes to this year’s Fall Fest has left many students feeling frustrated.

While students voice their opinions of the Student Association’s Fall Fest every year, SA’s format changes and lineup this year have raised many questions.

The new SA e-board said it made changes it has considered for a while, but many students felt left out in the process. Instead of having one concert at Baird Point or inside Alumni Arena as it was in past years, SA is offering three separate shows throughout the semester in the Center for the Arts as part of a new Fall Fest Concert Series.

The three shows are broken up by genre. A Sept. 21 show will feature hip-hop acts Vince Staples, Taylor Bennett and Blaise Moore. An Oct. 6 show will feature rock acts American Authors and Matt and Kim. And the final installment takes place on Nov. 10 and will host R&B acts Ashanti, Tinashe and Queen Naija.

We at The Spectrum feel the new format has potential, despite an underwhelming lineup.

Since the SA represents all undergraduate students who contribute in paying for the fest through the mandatory student activity fee, students should be able to play a more direct and transparent role in festival changes.

The last SA e-board offered a festival survey, allowing students to submit what genres they’d like to hear at the show and which artists they’d like to see perform. Haberl said he used a student survey from a previous year to decide on genres for this year’s shows. But students didn’t have any chance to vote on this year’s format change.

Having students vote on the format is crucial for a student-funded show. Even if the results aren’t in everyone’s favor, students will at least feel like their voices matter.

Some of our editors, along with many students, question how SA takes student suggestions into account based on these changes. We understand SA will make changes every year, but we as students should be included in the process.

Some of us think the idea of breaking up genres into individual concerts is a smart one. This makes it a better experience for students who don’t want to sit through genres they aren’t fans of, and would rather just have a night of music they can enjoy.

The switch to the CFA saves SA money on stage setup, as the venue already has a stage, unlike Alumni or Baird Point. This money, according to Haberl, is being reallocated toward talent, giving students more genre options to choose from.

We still have questions about festival costs; however, as it is unclear exactly how much SAsaved with the venue change. Throughout the course of the week, we have reached out to members of SA at least four times to verify information. Each time we reach out, we are referred to a new person who can’t answer our questions about money and the festival decision process. The SA public relations manager has redirected us to the organization’s general ledger and the fest press release, both of which do not answer our questions.

The current SA e-board ran as the R.E.A.L party, focusing on transparency and student engagement. But its decision to alter the festival’s format left many students in the dark.

For Spring Fest and future fests, we hope for more student involvement and transparency.

The editorial board can be reached at opinion@ubspectrum.com.