Both in and out of house candidates pose pros and cons 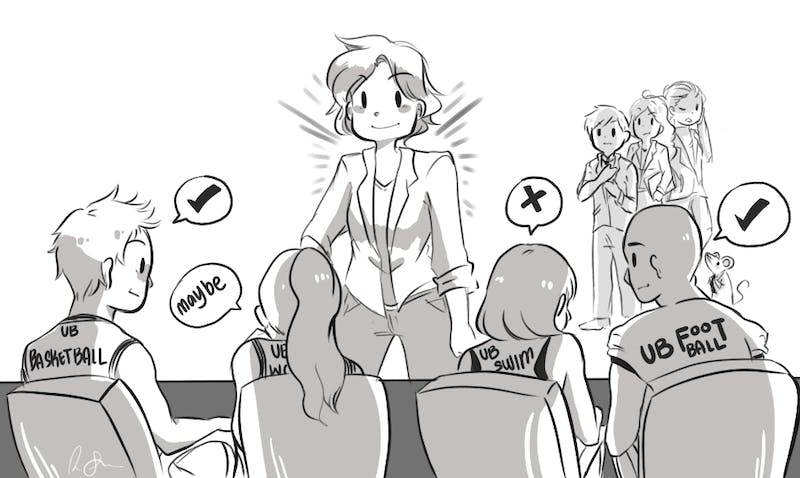 UB’s past two athletic directors left for more lucrative positions after brief tenures. As UB begins the search for a replacement, both in-house and outside hires present advantages and drawbacks.

On Jan. 17, UB announced Athletic Director Allen Greene would be taking over as athletic director at Auburn University in Alabama. During Greene’s time, UB’s teams had very few losing seasons and many of the weaker teams improved.

In particular, Greene helped lead both the women’s and men’s basketball teams along with the football team to some of their most successful years in program history. Under Greene, UB won seven MAC Tournament trophies and sent four teams to the NCAA tournament. He also spearheaded the planning for the $18 million Murchie Family Fieldhouse, scheduled for completion in spring 2019.

Greene took over for Daniel White, who accepted an offer at the University of Florida in 2015, after just three years at UB. White’s most well known contribution is the New York Bulls Initiative, an effort that emphasizes “New York” in all capital letters on UB sports teams’ jerseys.

The benefit of hiring young, ambitious athletic directors like White and Greene is they want to make a name for themselves and initiate big projects that put UB Athletics on the map and lead to major improvements in terms of actual gameplay and wins. This attracts new students –– and new money –– to the athletics department. Managing finances is a big component of an athletic director’s job, and after four teams were cut last year due to budgetary concerns, money is certainly something at the forefront of every student athlete’s mind.

stone to more lucrative positions at Division I schools like UCF and Auburn, and they do not stay to see their projects through. It promotes a bad culture at UB if we aren't promoting people who are staying loyal to the university.

An in-house candidate like interim Athletic Director Kathy Twist might not be looking to make huge sweeping changes, but would offer a sense of consistency that the athletics department has lacked in recent years. She knows the ins and outs of UB Athletics, and might have more of an investment in UB than someone who views it as an intermediary position.

Since 2012, Twist has been UB’s senior associate athletic director for sports administration in which she served as the sports supervisor for men’s tennis, women’s soccer, men’s and women’s track and field, men’s and women’s cross country as well women’s volleyball and softball.

Twist is beloved by student athletes and frequently spotted at games. She has an existing relationship with juniors and seniors, which any outside hire would obviously lack. Presumably, Twist would be here for the long haul, offering UB Athletics the consistency and continuity it has lacked in recent years.

Greene was a unique hybrid of an in-house hire and new blood: White brought him on as deputy director of athletics and Greene was obviously being groomed to eventually step into the athletics director position.

Twist likely will not take strokes as bold as her predecessors, but would bring their large initiatives into fruition. Some editors feel this loyalty and consistency is preferable to the grand gestures of directors past. While it is not ideal to have directors coming and going, other editors feel this keeps the program from stagnating and is a factor in the huge improvements in recent years.