English TA stipend increase is a step in the right direction, but the fight isn't over yet 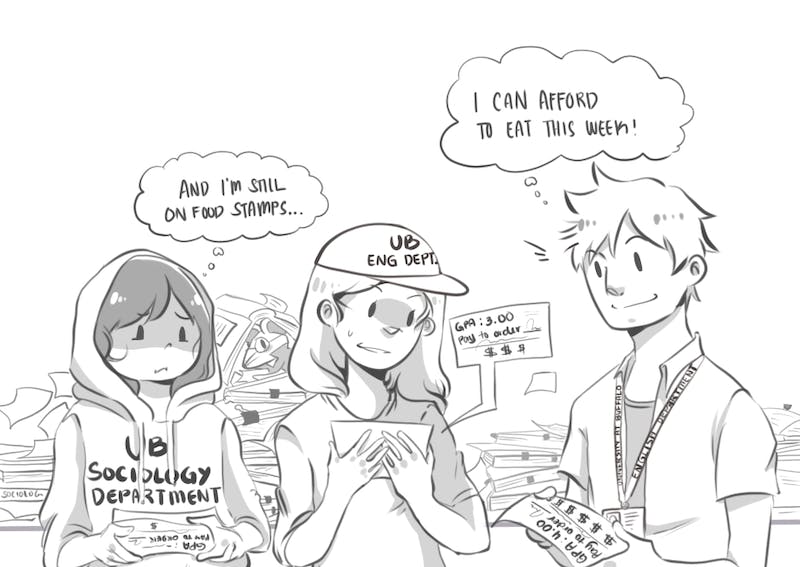 After months of rallying for a living stipend, English TAs and GAs are finally seeing a rise in their pay. Starting in Fall 2018, average stipends for English Ph.D candidates will increase to $18,000 per year, which is $3,000 more than current levels.

In three years, the average TA stipend amount will increase to $19,000. By including scholarships and fellowships in the funding package, the “very best” doctoral students will receive funding in the $20,000 range, a UB press release said.

TAs and GAs from the Living Stipend Movement have been rallying for higher stipends for all graduate students since the start of last semester. They are asking for a minimum stipend of $21,000 per year.

While this is definitely a step in the right direction, we don’t know if it’s time to celebrate just yet. For one, only TAs in the English department will see an increase in their yearly stipends; many other departments still fall below the national average for public university graduate students, which is $16,364 per year.

UB claims the average TA and GA stipends at UB are “nationally competitive” at an average rate of $17,343 per academic year. This figure is derived from payroll data for 1,429 students who received stipends from UB departments during the 2016-17 academic year.

UB’s Living Stipend movement says the actual average stipend for UB TAs is roughly $13,100 per year. Juhi Roy, an officer for the Graduate Student Union, said the university’s numbers differ from the Living Stipend Movement’s numbers because the university includes Research Assistants in their calculations. RAs receive higher stipends than TAs and GAs. In addition, the UB number is based off of 1,429 graduate students, while there are 9,772 graduate students enrolled at UB.

UB is touting this increase as competitive with the national TA stipend average, but when the national average is still well below the cost of living, this isn’t worthy of a pat on the back.

Another issue with the stipend increase is current TAs will only see an increase of $2,000 per year, as opposed to the $3,000 increase for new students. That means the TAs who have been fighting for higher stipends won’t see as much of a raise, which seems unfair to those who have been rallying for this for so long.

Plus, the English department had to shrink its cohort sizes in order to accommodate the higher stipends; incoming cohorts will be shrunk from 65 to 50 students.

Students with higher GPAs will also receive more money than those with lower GPAs. TA stipends aren’t like undergraduate merit-based scholarships; TAs need to live off their stipend. It seems unfair to punish someone trying to feed his or her family for poor academic performance. Some editors think it is reasonable to correlate stipend amounts with grades because this is consistent with most jobs where pay correlates with performance.

But TAs still make less than minimum wage; they’re not asking to have enough for a luxurious lifestyle, just enough to accommodate the basic cost of living in Buffalo.

We are excited to see progress in this movement and glad to see the administration is listening to student concerns. But this fight isn’t over yet, and it won’t be until every TA and GA is paid a living stipend.

By BRENTON J. BLANCHET
53 days ago

By JACKLYN WALTERS
53 days ago

By BENJAMIN BLANCHET
53 days ago