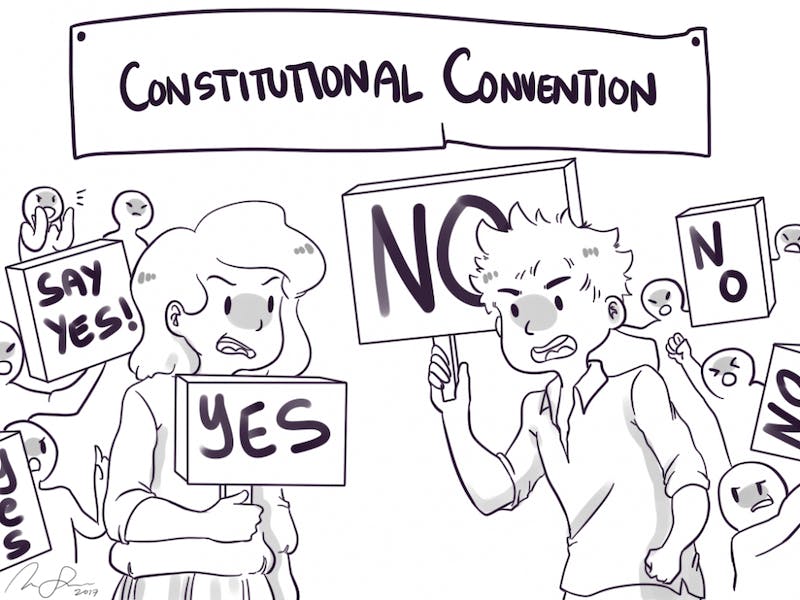 Every 20 years, New Yorkers vote on whether or not to hold a constitutional convention that could change how the state operates.

If voters check “yes” on the back of their ballots, three delegates would be voted in from each of 63 State Senate districts and 15 at-large members would be chosen in November 2018. The convention would take place on April 2, 2019. Any recommendations made by delegates would need to be approved by voters on Election Day in 2019.

Since the last convention was held in 1967, voters have consistently and widely been against it. The convention has drawn criticism as some fear that issues such as abortion and the guarantee of state pensions to unionized public workers and teachers could be altered or taken away by the delegates. Many Spectrum editors expressed hesitation about supporting the convention because their parents are teachers. One editor said he will vote “no” because he fears the convention could take away his mother’s pension.

The rest of the staff believes these concerns are largely a fear of the unknown. They said New York is a very liberal state and the elected delegates would be highly unlikely to vote against these issues.

And at past conventions, major rights or protections have only ever been granted, not rolled back.

The last constitutional convention led to concrete, progressive reforms. That convention protected the right to a sound, basic education; authorized the legislature to establish programs to meet educational needs and to provide for health care, pensions and unemployment insurance; increased wages for public workers; and guaranteed workers the right to bargain collectively.

The constitution has not been revised since 1967. It’s outdated, plain and simple, and it needs a revision. It’s no secret that Albany is incredibly corrupt. A constitutional convention would allow us to elect non-career politicians who are not already entrenched in Albany politics.

For those who fear push-back on rights, it is important to remember that not only do constituents get to vote on who goes to the convention, but any potential amendments to the constitution must also be approved by voters. The constitutional convention is, by its very nature, remarkably democratic.

Despite its potential advantages, at this point in the election it is very unlikely that the convention will pass. So in lieu of a convention, what can we do to create change in New York state? How do we address the corruption in Albany?

The answer is simple: vote. Especially in local elections, where your voice will have the most clout. Apathy is the biggest enemy of change and students and young people have historically had low voter turnouts.

It’s time to change that.