A bar near South Campus could be good for both students and community, but Main Place isn’t going about it in the right way 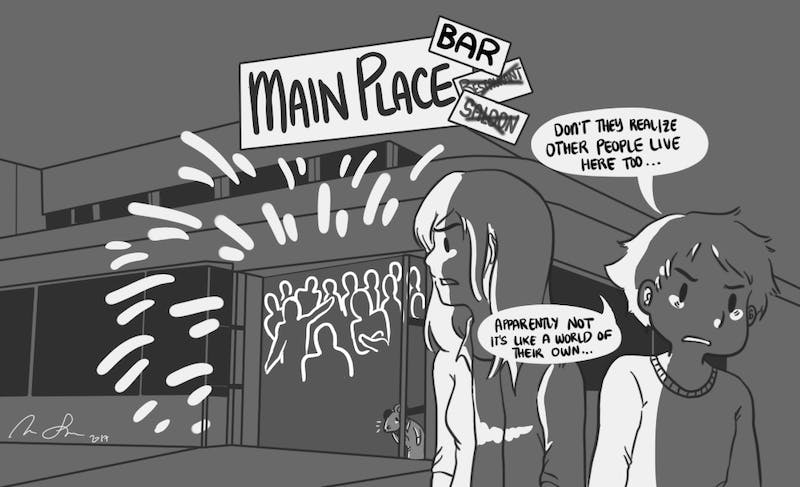 A local businessman wants to open up a bar on Main Street near South Campus. The proposed bar, called Main Place, has sparked controversy. University Heights residents fear the night life destination will cause disruption in their neighborhood. The owner wants to put in black tinted windows, which would violate Buffalo’s Green Code Ordinance. The venue also masqueraded as a restaurant in its liquor license application, which raises ethical concerns. And because the bar will host 18 and up event nights, there are underage drinking concerns.

While it is understandable that University Heights residents do not want disruptions in their neighborhood and we as students are eager to work with them to find compromises—such as the recently reinstated late night busing, which was changed to a small shuttle to deter partying—it’s starting to feel like we can’t win. If they don’t want house parties on the streets where they live, that’s fair.

But the proposed bar would be on Main Street, which is not a residential area. It could push students away from these disruptive house parties. Isn’t that ultimately what University Heights residents want? While students need to work on being more respectful to those who live in the University Heights neighborhood and there is no excuse for disorderly conduct or underage drinking, at the same time community members need to realize that college students are always going to find a way to party. So would they rather students throw ragers next door to them, or keep their partying to a bar several blocks away?

And they should have safe outlets to do so while causing as little disruption as possible. A bar offers a perfect compromise; so why are University Heights residents so opposed? There is already a bar on Main Street—The Steer—do they really think one more bar is suddenly going to create that much more disruption, if any?

While Main Place will host some 18 and up events, on most nights the bar will be a strictly 21 and up destination. So the students going to the bar aren’t going to be out of control freshmen. It will mostly be juniors, seniors and graduate students—many of whom feel they are running out of options for places to blow off steam following the recent shooting in Allentown and lack of night life options in Amherst.

There is a definite lack of night life opportunities in the areas surrounding both North and South campuses, which is why students tend to turn to disruptive house parties. Developing Main Street to include more nightlife will only benefit both students and community members alike. But Main Place might not be the best venue, given that it’s been marred in controversy from the outset. Main Place should be honest about the fact that it’s a bar—falsely claiming to be a restaurant just seems suspicious. The tinted windows are a city violation, and 18 and up nights could lend themselves to underage drinking.

A bar near South Campus is a good idea, but either Main Place needs to clean up its act, or another business needs to step in. Either way, another bar on Main Street is long overdue, and will inevitably happen eventually as the area becomes more and more developed.