"If Fracking Isn't Bad, Why Is SUNY Trying to Hide It?" 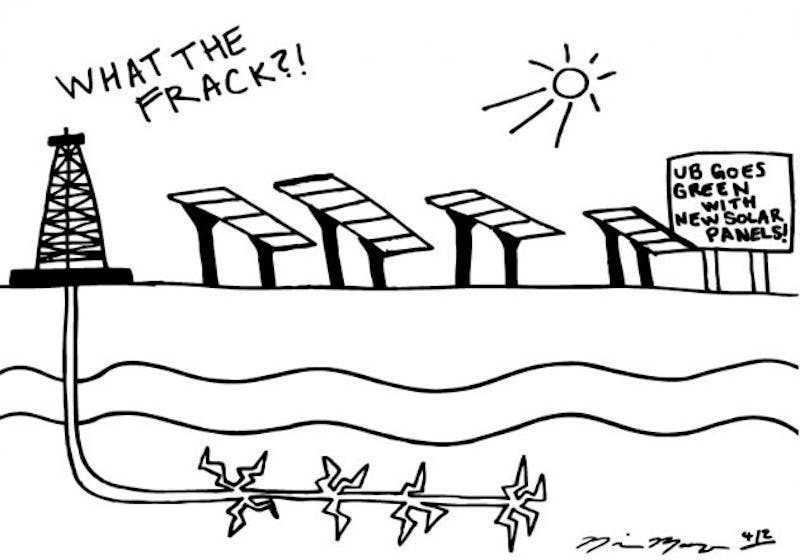 Last issue, we ran an important editorial cartoon. I hope you noticed it.

Drawn by Spectrum Creative Director Nicole Manzo, the cartoon depicted the environmentally controversial hydraulic fracturing, or "fracking," method being used to pump natural gas to campus via an underground pipeline. Above the ground are UB's new and highly touted solar energy panels, which stand next to a "UB goes green" sign.

That cartoon is basically true.

Last week, Artvoice reported that SUNY bought natural gas for five campuses - UB, Buffalo State, Fredonia, Alfred State, and the New York State College of Ceramics at Alfred University - in a $22 million deal with local business EnergyMark LLC. The gas "will be transported by pipelines direct from shallow vertical wells in New York and Marcellus Shale - horizontal wells in Pennsylvania," according to an EnergyMark press release.

The fracked gas started flowing on Sunday, according to a report at trade website Gas Business Briefing.

There is a statewide moratorium on fracking in New York State because of its controversial nature and because of evidence suggesting it could be environmentally harmful. But fracking is allowed in Pennsylvania. And EnergyMark Vice President Tim Wright confirmed to Artvoice that the Pennsylvanian gas is indeed "fracked."

"A big source of that now is gas that has been recovered through a fracking technique," Wright told Artvoice.

But that's not all he said.

"What we don't want to put in the press release - and we talked to SUNY about this - is that this is specifically gas from a fracked well. SUNY said they were fine with a press release as long as we didn't emphasize any fracking," Wright told Artvoice. And I think that's because of the political nature of fracking versus the physical nature of the supply source. And frankly, there's no way we can tell once the gas is put into a pipeline system."

First of all, it's humorous and astonishing that Wright said that to Artvoice. What was he thinking? I wouldn't be surprised if this is the last deal SUNY makes with EnergyMark.

More importantly, though, it's telling that SUNY didn't want the public to find out that the gas will be obtained through fracking.

There is substantial evidence suggesting fracking harms the environment and raises health concerns - so much so that state politicians introduced the moratorium - but I'm not even going to get into it all, because I don't want to turn this into a debate about fracking.

The point I want to make is that SUNY bought a product with over $22 million in public money and then tried to hide the true nature of that product from the public. And when an Artvoice reporter asked why SUNY was trying to hide it, a spokesperson responded thus:

"The word 'hydrofracking' - who said it, and who didn't - is irrelevant to what this story should be about."

Well, the journalism classes I took at my SUNY university taught me that reporters shouldn't let public relations people shape their stories. And I think a lot of taxpayers would find it "relevant" that SUNY isn't being totally forthright - some would say SUNY's being downright dishonest - with $22 million in public money.

Why would SUNY hide that its newly bought natural gas is fracked? After all, it lets its universities join and pay tens of thousands of dollars in annual dues to business lobbying groups like the Buffalo Niagara Partnership (BNP), which actively supports fracking. It also lets them establish programs like the "SUNY Fredonia Shale Research Institute," a pro-fracking "educational resource" that just so happens to be bankrolled by oil companies like Shell.

The next time you hear about "UB Green" and its new "strand" of solar energy panels along the Flint Loop, remember that fracked natural gas is traveling to campus under the ground, and consider that UB pays almost $50,000 per year to the BNP, an organization that lists "Defeat of the New York Solar Industry Development and Jobs Act of 2011" in a document called "2011 Advocacy Wins."

One step forward, two steps back.