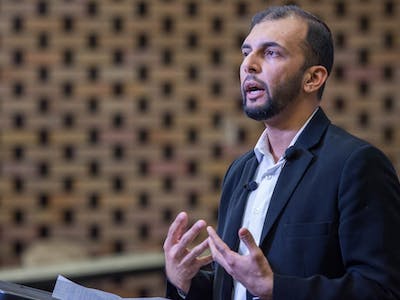 Qasim Rashid holds 'True Islam: A Response to Islamophobes and Terrorists Everywhere' discussion at UB
Qasim Rashid believes there’s a philosophy in media that “if it bleeds, it leads.” He thinks because Richard Spencer’s speech on Monday was more sensationalized, it garnered more attention. Rashid’s event, by contrast, was smaller, quieter and more peaceful, but about half of the audience left midway through. “Unfortunately, that has dominated our media lives – what’s going to get more clicks, what’s going to get more views,” Rashid said. “I think that’s why people left. If I spoke up there about how Sharia law is coming and Muslims are taking over, I guarantee you we would have had more.”