Julia Erbacher was always sure that she wanted to attend the Fashion Institute of Technology.

But her college journey didn’t go as she expected. After starting at Niagara County College Community College, changing her major three times and finally deciding to study Spanish education at UB, she still couldn’t shake her vigor for vogue.

Within the last year, Erbacher rekindled her flame for fashion and created her own “upcycled” clothing business, Fruitcake Apparel. Erbacher buys outdated clothing at local thrift shops and revamps it using paint, bleach and sewing kits to create Instagram-worthy pieces (@fruitcakeappareal) and give her customers the option of customization.

Her creations aren’t just for likes, though. She sells pieces that highlight how she broke out of her comfort zone creatively and embraced the chichi chick she is today. She makes work that she hopes combats the quick, dispensable nature of the clothing industry today often defined as “fast fashion.”

“I went through a period where I was buying, and I was contributing to fast fashion,” Erbacher said. “I was spending way too much money in general but then I just like wasn’t happy with my purchases, like they didn’t mean anything.”

But Erbacher wasn’t always so driven or directed in her snappy social ambitions. When exploring classes at NCCC she found her love for language and attributes her elegant elevation to the time she spent taking time to figure out who she was.

“It's a really good foundation to just take classes that interest you,” Erbacher said.  “Developing experiences and just learning about what your interests are and when your interests change, that's a good thing.”

Through an NCCC study abroad program, Erbacher had her first opportunity to travel to Peru. While abroad, she finally saw the connection between her personal and professional lives by experiencing the swish styles of worldwide fashion.

In the various foreign countries she traveled to since, namely Italy and Spain, Erbacher was exposed to trends different from what she is used to in the U.S.

“I was developing my sense of style, which I’ve always had an interest in. Through my travels and then coming back home, I was looking at clothes differently,” Erbacher said. “I started thrifting more and just making more conscious decisions about what I was buying and why I was buying it.”

Erbacher’s experiences abroad reopened her connection to personal expression that had been a part of her since she was a teenager. She began to see that her life could be more than just one thing or the other and that the clothing she started to create reflects her own ritzy revitalization.

“When we're younger we have an idea what we want to be when we grow up or what we want to go to school for, but then over the years we change direction a lot,” Erbacher said. “I think if something is like calling to you, and it’s like an itch that you can’t stop scratching or something that you can’t get out of your head, then something’s telling you to pursue it.”

Jason Woodfork, Erbacher’s close friend, witnessed both Erbacher’s posh personal development and the impact her expansion had on those around her.

“With her talents, turning old clothing into something new, creative and stylish gives you not only a new look but also gives you the feel that you've done something to help cut back on this issue at hand [fast fashion].”

“There’s always something new to discuss when we get together to chat over tea.” Mirablella said. “[Erbacher] uses Fruitcake Apparel as a medium for expression as she hand-paints and stitches designs to make each piece of clothing unique.”

Erbacher is constantly trying to evolve herself and her work and hopes to inspire others to explore their swanky side through their own journey of self-expression.

“The clothing that I sell now is just breathing new life into these pieces that somebody else did that may be perceived as trash,” Erbacher said. “Anything can be upcycled, and you don't have to be artistic to create. I think we should just be creating without the goal of having it look beautiful.”

Isabella Fortunato is an assistant arts editor and can be reached at isabella.fortunato@ubspectrum.com and @im_fortunato 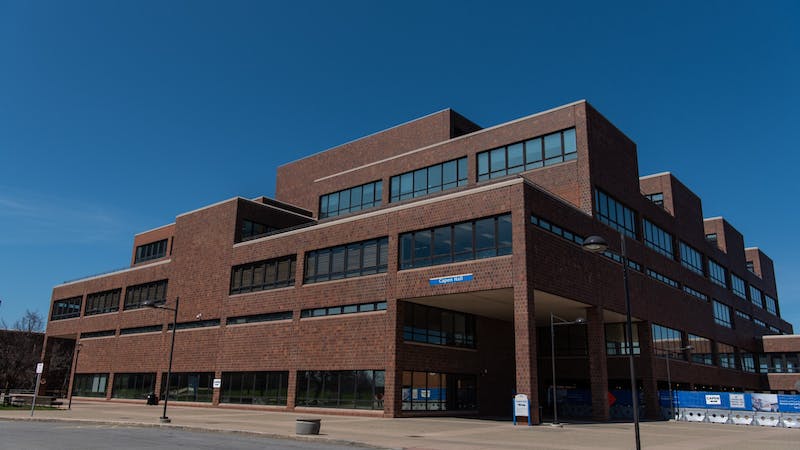 By JULIAN ROBERTS-GRMELA
15 minutes ago

By ELIZABETH NAPOLITANO
17 minutes ago

By ALEX WHETHAM
20 minutes ago