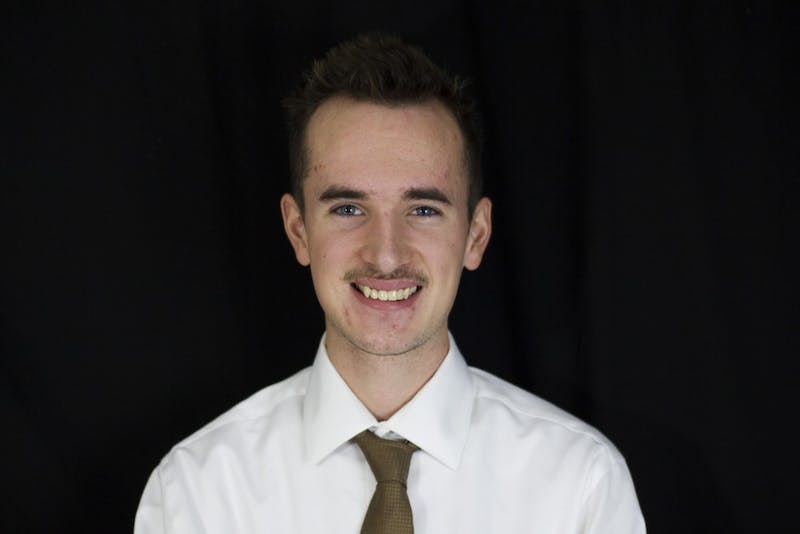 Last week, I stumbled upon a 1993 editorial cartoon in The Spectrum.

It depicted the burial of student radio.

The tombstone read “student-run stations.” Underneath, a caption: “administrators’ plans for college radio.”

Now, 26 years later, UB’s SBI review committee — made up of Student Life staff, Faculty Student Association board members and a business compliance director (not students) — recommended to drop student radio into its plot.

This is devastating to me and thousands of other UB alumni.

I’m a DJ at WRUB, UB’s only student radio station. I help maintain WRUB’s website and look after the studio. I’ve mixed dozens of shows and had listeners message me from as far away as Tampa, Florida.

So when my brother, Brenton, handed me the report from UB’s SBI review committee, my heart sank.

UB decided the private-nonprofit Faculty Student Association, not the student-operated nonprofit SBI which houses WRUB, would become the fiscal agent for UB’s student government fees. The committee claimed SBI was not transparent with fees and noncompliant. The committee wrote that it “recommends” the “elimination” of SBI services such as WRUB.

In just one lone sentence, the committee of UB staff members snapped their fingers like Thanos and asked passionate student DJs and entertainers to fade into a million pieces.

And that should never, EVER happen.

Thousands of DJs, musicians and UB community members have walked through the WRUB studio doors to express themselves. They’ve shared their love for musical theater, sports and hip-hop. The committee, on the other hand, determined that student government leaders “were unaware” of services like WRUB. They also determined “communication regarding” services like WRUB’s do “not appear to reach the general population.”

If that’s the case, then this is an issue that Student Life has brought on to WRUB.

Last summer, Student Life gave SBI about two week’s notice to move WRUB from its former Student Union studio to Diefendorf Hall. This caused SBI officials, myself and other DJ’s to organize a new studio space on South Campus. Along the way, SBI’s technical director helped me understand aspects of the radio station’s server and assisted in the setup.

I personally went down to South Campus, untangling wires for weeks and organizing equipment for hours, which impacted my graduate studies. I told myself if I had to jeopardize my performance in the classroom, I would if it meant students had an outlet to express themselves on this campus.

I created diagrams and scribbled copious amounts of notes so if WRUB ever moved in the future, students like me would be able to know what to do. It was tasking but one of the most rewarding experiences of my life, to be able to point to a radio station and say, “I’ve been a part of keeping this alive.”

So when six UB staff members supposedly “reviewed” WRUB this spring, they most likely didn’t know it was our first full semester back on the air in a year. Now, after Student Life shuffled around UB’s only student radio station like it was a pack of cards, Vice Presidents A. Scott Weber and Laura Hubbard are backing up six adult UB staff members, not students, that indicate student radio doesn’t reach the “general population.”

This is a lie.

When staff from the same department that complicated WRUB’s presence on North Campus question WRUB’s “general population,” then their internal review committee should review themselves.

Six non-students determined the value of student radio in just a single sentence, with zero explanation in the report.

They didn’t propose an alternative. They didn’t give anyone at WRUB time and they released the report at the start of finals week.

They offered one point of consideration: “elimination.”

The word “student” may be in some of the committee members’ job titles but, rest assured, their actions don’t reflect how students live their lives at UB.

WRUB has been a cornerstone on campus for decades and turns 40 years old this fall.

Roughly a half century ago in 1970, WRUB’s predecessor — WIRC — started in the dormitories. 60 years ago, WBFO began airing on South Campus.

If UB’s committee thinks it’s okay to shove radio’s deep and rich history into a shredder, what’s next?

Will it be The Spectrum, an organization that turns 70 years old next year? Maybe that way they can get rid of my voice and silence this column, too.

Perhaps they’ll cut the Student Association, too. After all, undergraduate students elect their peers who serve the voices of 21,000 students on campus.

So, despite student DJs sharing their voices on South Campus just as they did in the ‘60s and ‘70s, UB staff members made a decision that screams “your voices don’t matter to us.”

But, despite what their report says, UB will never be able to “eliminate” student voices.

Even if UB “recommends” WRUB stop its airwaves, the music and commentary will never go silent. The committee’s thoughts on WRUB are shameful and speak volumes about staff members who put “student” in their job title as a facade, not as an indication of their obligation to student interests.

Still, if the committee thought it could prepare a tombstone and sum up WRUB with one sentence, then it’s dead wrong.

Benjamin Blanchet is the editorial editor and can be reached at benjamin.blanchet@ubspectrum.com and on Twitter @BenjaminUBSpec.