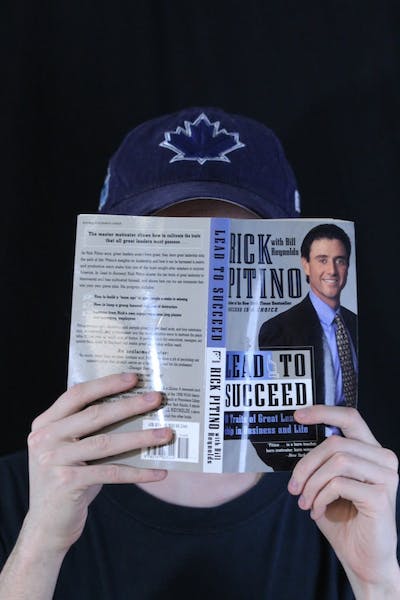 When I was four years old, I told my teacher I wanted to be a Tin Man actor.

Now I’m 23 and, well, an editorial role at The Spectrum is pretty dang close.

Yes, it’s true that many of our first dreams when we’re kids adapt over time. I never learned to sing and tap dance, so admittedly, I knew a rendition of the Tin Man asking a wizard for a new heart wasn’t going to be my shtick.

Fictional rusty men aside, I strive to maintain my utmost goal: leadership.

This is when trial week stepped in.

The Spectrum’s trial week is a week where writers try out their new roles for the next year. Current editor-in-chief understudy Brenton Blanchet put me on a particularly unique trial. I’m the paper’s first engagement editor, a social media-focused role.

I was elated but, at the same, I smelled an herb of pressure. I really didn’t how to lead with engagement. I had nowhere to go.

So I ran to North Campus’ metal literary sanctuary: the little blue book cart in Capen Hall. There, I was in heaven. I found a Student Life training cassette, a “How to Speak Portuguese 1986” book and a “Microsoft Works Windows ‘95” manual –– all the greatest hits.

But when I pushed aside the antiquated manual, I discovered the Holy Grail.

I flipped around the pages and the book was a 200-plus-page doozy packed with Pitino’s top-10 traits for success in the world. Pitino, who morally led his basketball program during an escort scandal earlier this decade, wrote on the back that “communication, consistency and selflessness are” effective to motivate people.

Just like the NCAA took Pitino’s championship ring in 2018, I took the book from the cart. I knew there was something I could extort from its pages.

“Lead to Succeed” starts with the typical sports-ish horn-tooting fest, where Pitino asks “thought-provoking” questions and rails about his days in New York. In the book, he talks about the need to get people “excited” and why leaders must jump in the boat with their teams.

Well, to an extent.

“People must understand what your vision is and that they are being asked to be a part of it, but that it’s really not a democracy,” Pitino, Kentucky’s Genghis Khan, said.

Aside from his “concrete vision,” Pitino litters his book with some of the greatest minds in history (in his opinion, of course). These “leader profiles” show Pitino’s comparisons between the likes of Steve Jobs to Moses. Throughout the book, these profiles reveal Pitino as the taker of the checkered flag and winner of the Nextel Cup of sacrilegious parallels.

Still, I marched on and I looked deep for any semblance of what leadership can look like on a college campus. The chapter “Build a Team Ego,” for instance, suggested readers go out and grab a good floor rug to heighten morale. I skipped right on after he compared the 1999-2000 Boston Celtics, who went 35-47, to NBA legend Bill Russell’s unmatched spirit and glory.

This is when Pitino spirals into self-incrimination.

The coach, midway through the book, recalls a haircut he got on Newbury Street in the late ‘90s. The barber tells him not to pay but Pitino refuses.

“That made me uncomfortable,” he wrote. “By taking things you haven’t earned, accepting freebies that are being offered because of your position, you are compromising yourself.”

Tell that to the Louisville basketball staff, who gifted players and recruits with escorts earlier this decade.

As a budding student journalist, I wanted to find anything to take out of this book that didn’t revert me back to thinking about “B.M.F.” by Rick Ross or million dollar Adidas deals. But even when Pitino tried to be fair in the book, he just attacked the free press and said he can’t respond to criticism, a huge contrast with my values.

I grew tired last week, searching for answers. I sifted through his comparison of the Celtics to the Freedom Trail and the Roman Empire before I gave him one last chance.

“And what do you do as a leader? You deflate behind closed doors,” Pitino wrote.

“[But] I look at my situation here with the Celtics … and I know I cannot lose my optimism. … You have to stick to it.”

So unlike Pitino, even if I lose my optimism at The Spectrum, I still have the Tin Man gig to fall back on.

And I don’t need to cut a check for that.

Benjamin Blanchet is the engagement editor and can be reached at benjamin.blanchet@ubspectrum.com and @BenjaminUBSpec.