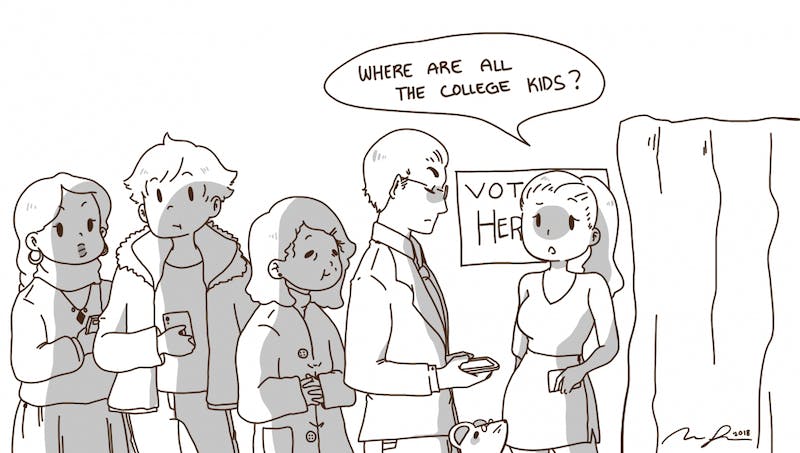 Young people aren’t projected to have a big effect on midterms on Nov. 6.

By next year, the U.S. Census Bureau says we will be the largest living adult generation, bigger than Baby Boomers, the World War II babies who have held that title for decades.

Sadly, not enough of us vote to make our voices significant.

This is nothing new.

Harvard’s John F. Kennedy School of Government found 40 percent of 18- to 29-year-olds say they will “definitely vote” in the midterm elections.

And even here at UB, 84 percent of students surveyed in The Spectrum’s political survey said they registered to vote, while 43 percent said they will vote.

These numbers are improving, but they can be better.

We at The Spectrum think the university and the Student Association can spend more time and money thinking about ways to motivate students to vote.

It’s not just up to celebrities and politicians –– like Hillary Clinton telling us to “Pokemon-Go to the polls” –– to push non-voters. Our educators, school administrators and student leaders should also work at it.

We don’t get a day off school to vote and many of us work jobs and other responsibilities that make voting inconvenient or impossible. If the university and the government is serious about getting college students to vote, it should make voting days holidays. Then we’d have no excuse for not showing up. Our undergraduate Student Association can reach 20,000 students, with many being voters. The SA homecoming carnival attracted hundreds of students students. Fall fest often brings out thousands. On Wednesday, students crowded around a Student Union stage for a pie-eating contest.

Not one of these events promoted midterm voting.

But they could, and it wouldn’t take much. A short video or even flyers would be enough.

It is imperative to get young people out there.

Some colleges–– including one formerly attended by a Spectrum editor –– give T-shirts and prizes to students who displayed “I voted” stickers on Election Day. This is the type of engagement UB needs.

We could be the swing vote this year and every year from now on.

We have to do our part. We at The Spectrum will be voting and we’ve tried to convince our fellow students their vote matters.

We’d like to see our school and its leaders do the same.

The editorial board can be reached at opinion@ubspectrum.com