Ropes, treasures and artifacts found on trek through UB's 200 acres of land 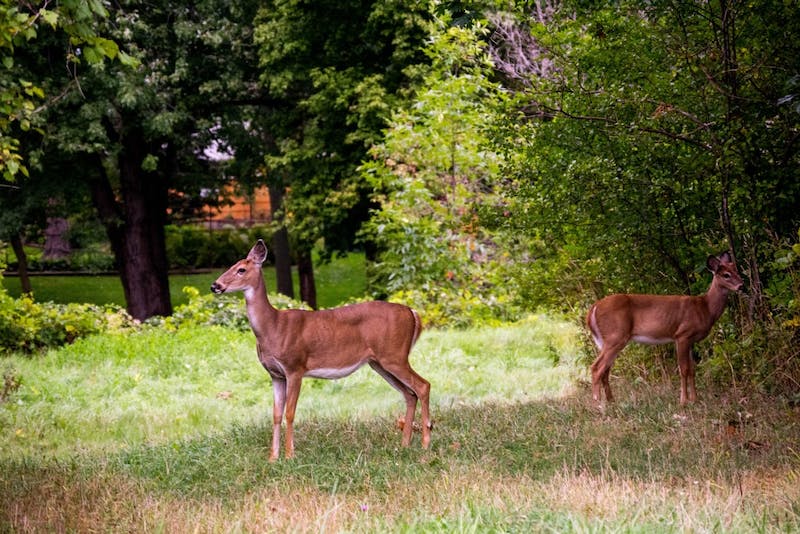 This is a satirical column.

Earlier this month, The Spectrumwrote about UB’s plans to not build or develop on roughly 200 acres of land, east of the Millersport Highway.

The land is mainly used for recreation paths and a radio tower, but a majority of the land consists of woods, trees and plant life.

Most students only know about the land based on one sign, so The Spectrumdecided to signal in adventure and complete a trek into the forest on Oct. 18.

The quest started at approximately 6 p.m. after a gruesome four-minute hike to the area under the Millersport Highway bridge near the Ellicott Creek. We spotted a group of squirrels scurrying into the treescape and we, green with envy, followed them into the tall grass.

But the sun went down on our party, and we were forced to rely on our three strengths: our copies of the Society of Professional Journalists’ Code of Ethics, burnt Tim Horton’s double-doubles and failing flashlights from our low-battery iPhones.

As we entered the forest, we quickly realized that we would soon not be able to see where we were walking. Often we would joke about how likely it would be for an ax-murderer to appear and start chasing us.

Fortunately for us, we stayed alive to retell our accounts and we headed off on a quest for unknowns and UB secrets. Our adventure started off unceremoniously, as the first thing we unearthed was an old Pabst Blue Ribbon can in a dirt pile.

It was nasty, but we touched that old can as it proved there were a few students who actually used the land. Or maybe Smokey the Bear and Bigfoot were slamming down a few cold ones with Mother Nature.

But while our journey remained on land, it also took off by sea.

In the distance, we spotted a glow emanating from a rustic, vintage chest. Lo and behold, inside the chest held an ocean of treasures: slimey pamphlets, inhalers and a number of fake coins, rings and jewelry.

In fear of getting a hex put on us, we closed the chest. By no means is this chest UB’s version of Davy Jones’ Locker, but searching through the dirty chest may anchor a ship of diseases on your immune system’s dock.

After we dug up some faux gold doubloons, we heard a distinct rustle roughly 18.46 meters away from us. A four-legged creature not named Victor E. Bull and his pal were startled by our presence.

It was a family of deer, who had to be Radiohead fans because seconds later, they knew how to disappear completely.

We quickly followed the deer, but were no match for their top speed of 30 mph. Our chase quickly saw us make a quick veer to the left, where we found an old rope attached to a tree.

Quickly, we decided to leave the forest and ran off in the other direction. The Halloween air had us more creeped out by the dilapidated thread than usual and we quickly realized how scary the dark wooded campus land is.

On our exit, we saw an old-looking plastic bucket. Even if the bucket was an ancient  artifact tied to the long-forgotten UB 2020 construction plans, we were too busy escaping with our lives.

After what felt like days pushing through the spooky land, we arrived at an exit and quickly returned to the nearby bike path. But as we left, we saw what appeared to be a small piping tunnel that went directly underneath the forest. Was it for mole people, a secret underground cult or rain runoff?

The mystery is out there.

As we continued to walk on the trail, we all discussed how lucky we were to be alive. The forest is far too spooky for any club or university group to use the land and we have the dirty PBR can to prove it. If anything, we –– The Spectrum –– call all students to beware of the haunted forest at UB.