Fiancé has such a nice ring to it 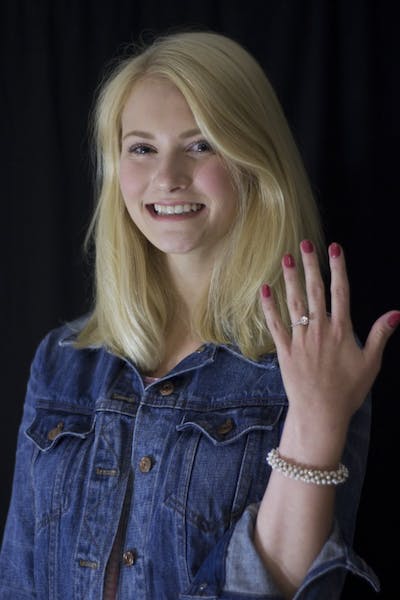 We were outlet shopping in the morning when my boyfriend, Nate, started rushing me to finish so we could continue on our road trip to Michigan to visit my family.

If you know me, one of my least favorite things is having to shop on a time limit and I was not having it. Labor Day weekend deals and sales were waiting for me.

I was slightly irritated with him for rushing me, but soon after, we left to make it to our final destination of Cadillac, Michigan.

Once we got to town, Nate told me he made us dinner reservations at our favorite restaurant –– the one we go to every time we visit. Hence, the rushing to finish shopping.

I then rushed to get ready, another thing I hate doing, while Nate left to help my dad with something at my uncle’s house. After Nate returned to pick me up, my hair was curled and heels were on, we got in the car ten minutes behind schedule.

He seemed upset I was running late, which is surprising because I’m always late and he knows that better than anyone.

He played our favorite songs on the car ride there and missed our turn to the restaurant.

For someone who wanted to make it to the restaurant on time, he seemed unworried now.

He finally turned the car around and parked in a lot alongside the lake. It wasn’t restaurant parking, but at least the building was still in sight. My heels weren’t too high, so I knew I should be able to make the trek.

We started walking to the restaurant and as we walked by a pavilion overlooking the lake, I stopped in my tracks.

The pavilion, which has a beautiful view of the lake, was completely filled with lit candles and rose petals, with a rose petal path leading from right where we were standing to a heart in the middle –– it was breathtaking.

“This is us,” Nate said to me. And in that moment, I knew my life was about to change.

Then, I blacked out.

I can’t remember a word he said to me during the proposal. I was so caught up in the moment, surprised and overwhelmed by emotion, that I truly cannot remember the proposal.

I do remember him asking to marry me, which is good because he needed a response.

Of course I said yes to my best, most trusted friend and the love of my life. After he put the ring on my finger, I do remember hugging and kissing him, and hearing the cheers of onlookers and car horns of passer-bys. They all knew what happened and I felt like a movie star.

I only remember the sweet words he said to me during the proposal now, after asking him to go through his speech again at dinner that night for me.

You don’t expect to blackout during your own engagement –– especially if you were anticipating the event sometime in the near future. From the talks we have had, I knew it would happen sometime this semester. I thought I would be mentally prepared for it.

You cannot prepare yourself; however, for a life-changing moment such as this one, no matter how hard you try.

You can tell yourself you’re not going to cry when it happens, but really, when you’re so wrapped up in the moment, you might cry like a baby like I did.

Now that I am engaged, I have a beautiful ring on my finger that I can’t stop looking at.

I have to consciously put effort into calling him my fiancé, rather than my boyfriend.

I also get to plan our wedding now, which I have been dreaming about ever since he asked me to be his girlfriend under Fourth of July fireworks over four years ago.

I admit I have done wedding research prior to getting engaged, which has made planning easier than expected. Even still, planning is a lot of work.

Now, I actually have to act on these details and book vendors, rather than daydreaming about them. Doing this on top of classes and other responsibilities is stressful, to say the least.

Unfortunately, wedding planning is far more entertaining than schoolwork. I imposed rules on myself to make planning a reward after I finish a given amount of classwork.

I know there can be a stigma against young marriages, but thankfully, I haven’t experienced any negative reactions yet. I am 20; Nate is 22 and friends and family have been nothing but supportive and wedding vendors haven’t given us any issues about our ages so far.

It helps that we have been together for so long and that we are having the wedding next summer, after we will both be finished with college and have jobs.

But if we could have provided for ourselves years ago, I would already be Mrs. Feldman.

When you know, you know. And we have known for years we wanted to get married.

I am so blessed, honored and excited to be going on this journey with him and thankful that we get to start our lives together that much earlier than everyone else our age.

Kirsten Dean is the assistant features editor and can be reached at kirsten.dean@ubspectrum.com and @KirstenUBSpec on Twitter.

By BRENTON J. BLANCHET
21 days ago

By JACKLYN WALTERS
21 days ago

By BENJAMIN BLANCHET
21 days ago

By JULIAN ROBERTS-GRMELA
21 days ago