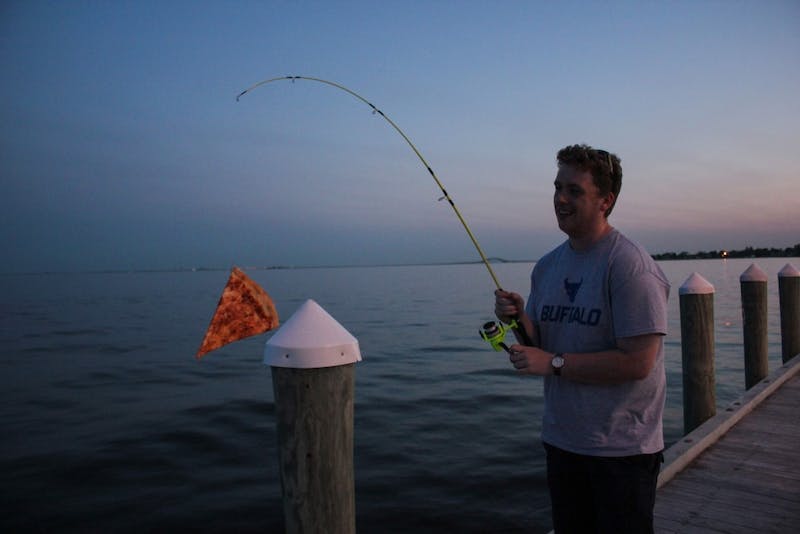 Hello all incoming freshmen from the pizzeria-strewn, lighthouse-encircled island that everyone loves to hate: Long Island.

As a reformed Long Islander myself, I get where you guys are coming from.

When you fly into town, you’ll scoff at Buffalo’s one terminal airport. When you take the train up to Exchange Street, you’ll be confused as to why the station is a small cabin under a highway. If you drive up, you’ll spend the last hour of the trip wondering what barren hick town you’ve decided to dedicate the next few years of your life to.

You’ll think you’re real high and mighty, coming from some town in Suffolk County no one has ever heard of that has, like, the best bagels in the whole world. Maybe Tina Fey once ate at your pizzeria, or your friend’s uncle went to high school with Billy Joel.

You’ll look on in morbid curiosity at a line jutting out of some weird, not-Dunkin-Donuts place called Tim Horton’s. Your assigned roommate, who’s from Hamburg or East Aurora but basically Buffalo, will drink strange beers like Genesee or Labatt’s that you think tastes like piss. You know what real beer is. It’s Budweiser and Natty Light. You get it. You know what’s what.

And this, my sad dear Jets fans, is why everyone’s going to hate you until you learn to turn it down a notch. In fact, to help you learn when to shut your “Lawn-Guy-Land” mouth, I have a few key points to remember as you adjust to living in a city like Buffalo.

1. They’re called “chicken wings” and you’ll show them some respect.

They aren’t Buffalo wings. You’re in Buffalo. Don’t be redundant.

You may be wondering, “Dan, how can I show a chicken wing respect? I’m a Long Islander, I barely know how to respect homeless people!” It’s simple. Don’t go to Buffalo Wild Wings.

Why in the name of all that’s good and holy would you go to a place like Buffalo Wild Wings? You’re in a city where even bowling alleys are serving up wings that’d make your daddy cry. Go to Duff’s. Go to Anchor Bar. Go to Cole’s. Go to literally any bar in a 30-mile radius and you’ll be better for it. Also, you should really be respecting homeless people.

Also, I hate to break it to you, kid from Hempstead, but Hempstead is actually not the city of New York either. You’re not from the city. I grew up about a five minute walk from Queens, and I wouldn’t dare say I’m from New York.

Let’s be real here: your biggest experience with New York is going into Penn Station –– transfer at Jamaica –– and taking some cool pictures around Central Park or the Metropolitan Museum of Art. You’d only claim to be from New York because you know how culturally bankrupt Long Island is and how your favorite pastime is leaving it.

So when you walk around Elmwood or Hertel Avenue and say, “Wow, it’s like Brooklyn if Brooklyn sucked,” remember that you only want to move to Brooklyn now because you crave a nice delicious slice of gentrification. I bet you’re still afraid to go to Harlem. But that’s a whole other column.

A Gothamist* piece back in 2015 titled “Millennials Are Moving To Buffalo & Living Like Kings” makes a great case for Buffalo being the kind of city that can actually accommodate the up-and-coming generation. The article says Buffalonians would feel that moving to the city now “is like dating the girl next door who's undergoing a She's All That-style transformation.”

You’re going to think the city’s lame, the people are lame, the weather’s terrible and everything sucks. But, dear reader, this is only because you have yet to truly discover a city.

Let’s face it: New York City for Long Island teens is nearly impossible to personally discover. It’s too big, too full of histories already known and written, and certainly not financially accessible for young adults –– unless your parents pay for that kind of stuff.

But Buffalo has many changing neighborhoods, plenty of cheap houses and places to rent, and more than its fair share of excellent cuisine and cafes.

Once you’re done whining about how much the pizza sucks, go find something you actually like. That, young bagel connoisseur, is called personal growth and you’re going to need to start doing it if you want to stick around.

Look, I’ve been maybe a little harsh on you, maybe a little unfair. You’re fresh out of high school and are still figuring yourself out. I was once in your shoes, too.

I came to UB a psychology major and graduated last year an English major with a certificate in creative writing and have worked for The Spectrum off and on for four years. I had never really read much or written, and I barely understood how the news worked when I arrived. I harped on the pizza thing, made fun of my Sabres-loving friends and was generally a cocky little dork. In many ways, all of those things are still true.

But I started writing poetry and editing for the newspaper, both somewhat on a whim. And through both, I made the sort of friendships that keep you going and growing, and discovered the wonderfully weird city of Buffalo. I learned the world is much more than wineries, beaches, endless suburbs and train rides into Manhattan.

So long story short: forget everything you think you know for sure, keep an open mind and follow your whims. Welcome to Buffalo.

*If you’re one of those Long Islanders who wrongfully claims the title of New Yorker and you also don’t know what the Gothamist is, then I’m afraid there is no saving you.

Dan McKeon is the co-managing editor and can be reached at dan.mckeon@ubspectrum.comand @Dan_McKeon_

By BRENTON J. BLANCHET
88 days ago