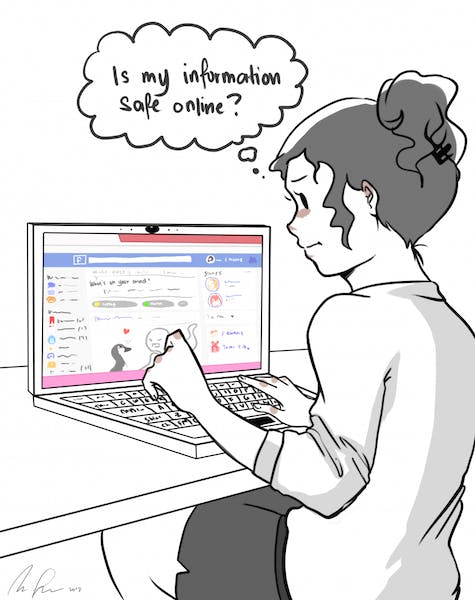 On March 19, The New York Times reported that Cambridge Analytica, a political data-mining and consulting firm, collected over 50 million Facebook users' private information without their knowledge. The data was collected through a personality quiz titled “thisisyourdigitallife.” Facebook users could connect the quiz to their accounts, granting access to their profiles. User information from the quiz was later used to target Facebook users for crafted ads and messages for President Donald Trump’s 2016 election campaign without users’ consent.

And the Cambridge Analytica scandal isn’t the only example of privacy issues on Facebook. On March 26, The Wall Street Journal reported Facebook has also been logging some Android users’ texts and phone calls.

Some may argue that people should take responsibility for their own privacy. And a certain level of personal responsibility is important because it is ultimately up to the user to determine what and how much information about themselves to post online.

As millennials, we are notoriously teased for our habit of oversharing. And in 2010, Facebook Chairman and CEO Mark Zuckerberg said he believes privacy is no longer a “social norm.”

The Spectrum editorial board is divided on the best use of social media in 2018. Some keep their social media use strictly professional. One editor chooses to keep social media use to a minimum due to privacy concerns. But others are more relaxed, emphasizing that social media was designed to be used as a way to connect. They are not concerned about their data being stolen if they have nothing to hide.

But the crux of the Cambridge Analytica scandal is that information was taken and used for political purposes without users’ consent or knowledge. Even if we don’t have anything to hide, it is unnerving to think businesses can take and use our information for whatever purposes they choose.

Technology is a powerful tool that lets us connect with friends and family around the world. We shouldn’t have to sacrifice our right to use online social platforms for some semblance of privacy.

The solution needs to go beyond just taking individual and company-level measures to protect privacy. We need federal guidelines for the uncharted territory of Internet privacy.

The Internet has developed so rapidly that laws have not had time to catch up with the pace of change, but that cannot be an excuse any longer.

There is already a blueprint in place for federal Internet privacy guidelines. President Obama proposed a privacy bill of rights in 2012. Obama’s proposal included several ideas for giving people more control over their information, such as making data collection more transparent and putting limits on what businesses can do with the information they collect. Congress was unfortunately not interested in the proposed policies.

But in light of the Cambridge Analytica scandal, we hope Congress will reconsider similar legislation. While it is unlikely an Internet privacy bill would pass under the current Republican majority in Congress, we need to consider candidates who value Internet privacy when going to the polls in November. At the very least, it is time for Internet privacy to be a part of the political conversation.

So when you go to the polls this fall, be aware of where candidates stand on Internet data collection. Your privacy depends on it.

By JACKLYN WALTERS
18 hours ago