College newspapers are a vital part of campus communities

The Spectrum stands with the hashtag #SaveStudentNewsrooms movement 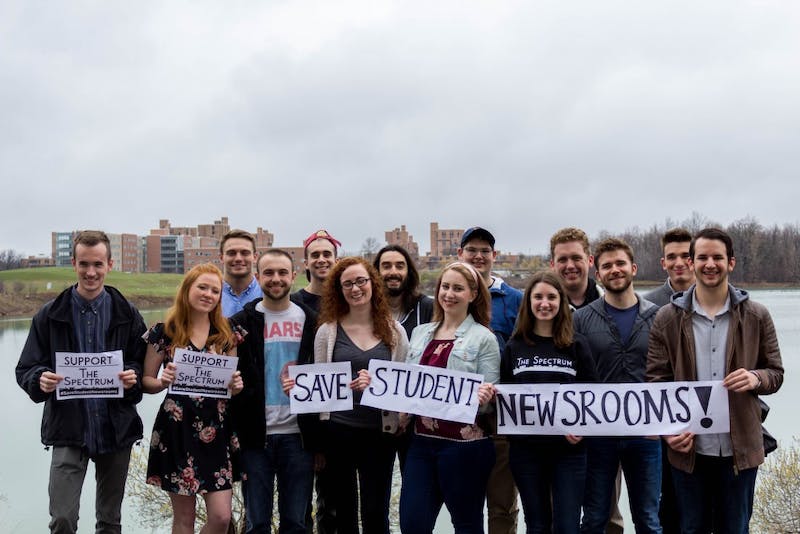 Student newsrooms are in danger. Southern Methodist University’s student newspaper, The Daily Campus, will dissolve in May. The University of Central Florida’s student publication, The Central Florida Future, shut down in 2016 after 48 years in circulation. Herriman High School students launched their own independent publication after administrators deleted an article on a teacher’s firing.

In honor of Student Journalism Day, the editor-in-chief of University of Florida's independent student newspaper, The Independent Florida Alligator, organized a nationwide day of action to support student journalism. The Spectrum fully endorses the hashtag #SaveStudentNewsrooms movement. We stand in solidarity with more than 100 college publications across the country that are advocating for editorial freedom for student newspapers because we believe in the importance of student journalism. Because we know the work we do is vital to our community of over 30,000 students, staff and faculty.

The Spectrum has been fully independent for 68 years and plays a crucial role on UB’s campus.Our publication has won roughly 50 national journalism awards within the past four years. And our reporting has led to meaningful change on campus. A story about lack of international student integration prompted the university to conduct a study on how to better serve international students. After we reported that UB photographers were using student photos for marketing purposes without consent, the photo policy changed.

Within the past year, we broke the news that former UB Vice President Dennis Black and former Campus Living Director Andrea Costantino embezzled more than $300,000 from student and faculty funds. We reported about the UB Foundation’s investment in fracking and the university cutting four sports teams. Our reporting has also raised awareness about low TA stipends and a lack of black faculty.

We’ve published stories on the lack of oversight for SUNY foundations and the ongoing battle of private-public partnerships on campuses. We conducted a swab test that revealed E. coli and other bacteria and fungi in certain areas of campus. We covered the changes in the UB Curriculum that allows students to take a course about electrical transmitters and receivers to learn about racism. We also reported on the unusable state of the campus tennis courts for Division I teams. And the arts desk profiles talented student artists like Kari Quimpo and Charles Augustin.

Without The Spectrum, these important stories would go untold.

UB does not have a journalism major, so The Spectrum is where aspiring reporters gain the skills, knowledge and experience to compete in the challenging field of journalism.

Student journalism matters now more than ever. If you value student voices, if you value the right to have information about issues on your campus, if you believe administrators should be held accountable, it is imperative that you support the hashtag #SaveStudentJournalism movement.

As it stands, The Spectrum does not receive any financial support from the university. All of our funding comes from ad revenue. If you believe in the importance of the work we do here at The Spectrum, please consider supporting us and donating.