While unopposed, party still stands up to scrutiny 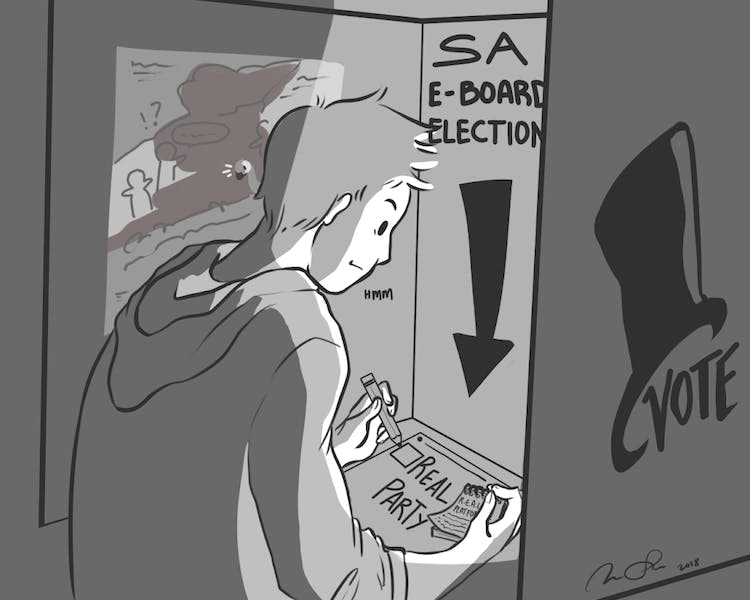 SA e-board candidates are running unopposed for the first time since 2015, but that does not give students an excuse to be apathetic.

But the candidates’ unopposed status should not give them a license to be apathetic, either.

The SA e-board is responsible for roughly $4 million of undergraduate student money. These funds come from the $104.75 per semester mandatory student activity fee. The e-board members allocate this money toward events such as Homecoming Carnival, Comedy Series, Distinguished Speakers Series, as well as Fall and Spring Fests.

Because their election is guaranteed, they have a responsibility to be proactive with their initiatives, especially considering Haberl and Escamilla are already in SA positions. They can and should begin planning for upcoming events like orientation and Homecoming Carnival now.

Haberl, a junior political science and legal studies major, is SA’s chief of staff. He served as a member of SA Assembly his freshman and sophomore year and completed an internship with the New York State Assembly. The assembly hired him following the internship, making Haberl the youngest legislative aide in New York state history. He also serves on the Elma Board of Education.

Haberl’s political experience is impressive and makes him extremely qualified to serve as SA president. But Haberl should keep in mind he is not in Albany. He is a student here to serve his fellow students. He should make sure he remains accessible, grounded and demonstrates commitment to his presidency, despite his outside political work.

Evelyn, a junior health and human services major, does not hold an SA position, but she makes up for that with related work experience. She has worked as a resident adviser and an orientation leader for two years, she’s the Black Student Union events coordinator and she helped found the Fashion Student Association.

Although Evelyn doesn’t have administrative experience in SA, her work with clubs and her leadership experience make her a good candidate for vice president, as the vice president’s primary role is working with SA clubs. Her club experience means she is familiar with the types of problems they face and how to address them.

On top of her strong qualifying experience, Escamilla has solid plans for her role as treasurer. She said she is going to create incentives for clubs to familiarize themselves with the SA finance book by quizzing club members on its contents. Those who score well will only have to fundraise 45 percent of their current budget to get a budget rollover for the following year, instead of the current 50 percent. This is a smart way to give clubs the motivation to educate themselves on SA finance rules and regulations.

The candidates have also emphasized their commitment to “transparency,” a buzzword that was the hallmark of current SA President Leslie Veloz’s campaign. Escamilla said she will work to make club budgets more transparent by clarifying the process of making club budgets during orientation. Haberl said he watched the SA Senate kick a club out of a meeting, which violates New York’s Open Meetings Law. Since then, clubs have not been kicked out of meetings.

We are glad to see Haberl has a history of standing up for transparency, but his promises cannot stop there. Haberl and Evelyn need to take concrete steps to ensure more transparency. For one, all SA meeting minutes should be posted online. Currently, minutes are not posted or are posted inconsistently.

We would also like to see town hall meetings throughout each semester to discuss current events and inform students about what is happening in SA. Open forums like this would make SA not only more transparent, but more accessible for students.

Students should also be invited to SA representatives’ meetings with President Satish Tripathi and Vice President of Student Life A. Scott Weber. Veloz says she meets with both of them frequently, but other students should be allowed to attend these meetings and hear what took place in them. This will hold our representatives accountable and ensure we know how often they are actually meeting with administrators.

We are confident in the R.E.A.L. party’s ability to lead effectively and ensure accountable SA leadership, as long as they follow through with their promises.

When Unity Party candidates Minahil Khan, Sean Kaczmarek and Joe Pace ran unopposed in 2015, only 1 percent of the student body voted. While this is understandable given the lack of competition, it is still disappointing. If you support the candidates, you should make your voice heard. The SA election will be held March 27-29 from 9 a.m. to 5 p.m. in the SU Theater.