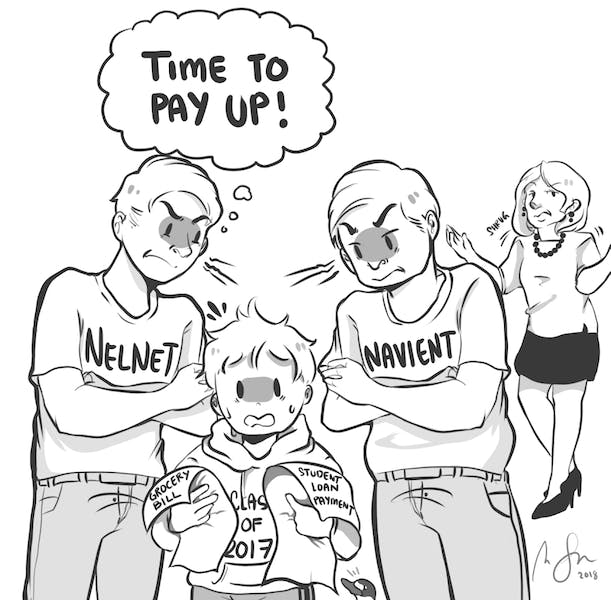 Betsy DeVos thinks states should not impose regulations on student debt collection agencies, many of which have been accused of unfair consumer practices.

In a memo released by the Department of Education on Friday, DeVos said she believes state regulations on debt collection companies are inappropriate and “undermine” federal authority. The memo favors a single, streamlined federal loan program.

There are no clear guidelines from Congress on memos of this kind. Courts have often ruled that bureaucratic institutions like the Department of Education are able to “fill in gaps” by crafting policy in areas over which they have authority, according to political science professor Jacob Neiheisel.

Each state has established a borrower’s bill of rights with minimum standards for timely payment processing, correction of errors and communication. DeVos wants to eliminate those rights.

Loan service companies such as Nelnet, Navient and PHEAA serve as intermediaries between you and your lender –– in this case, the federal government. These companies are notorious for preying on college graduates. Borrowers have reported several problems including lost paperwork, conflicting advice on repayment plans and payments applied to the wrong loan.

These poor customer service practices have led to higher interest charges and late fees, longer repayment and confusion among borrowers, according to a 2015 report by the Consumer Financial Protection Bureau. The Bureau received 12,900 student loancomplaints between September 2016 and August 2017. Seventy percent of the complaints were related to customer service issues.

As students, if this move to deregulate loan companies on the state level goes forward, it will greatly affect our post-graduation life. The student loan repayment process is confusing enough as it is, even with state consumer protections. The process for setting up monthly payment plans can be especially unclear, and grads often get penalized as a result. And while the government has rolled out several loan forgiveness programs aimed at alleviating some student loan debt, the process is just as confusing.

Massachusetts Senator Elizabeth Warren has sponsored an amendment to a recently proposed bank deregulation bill. The amendment would stop Betsy DeVos from trying to deregulate student loan companies. Warren is calling on the Senate to bring it to a vote.

In a Senate meeting last Thursday, Warren said we should be standing with students, not big banks. Unfortunately, Warren seems to be the only one of our representatives standing up for us on this issue. As long as the House and Senate maintain a Republican majority this will unfortunately remain the case.

But that does not mean students should feel hopeless. There are still, as always, routes for change. Students should educate themselves about student loans and the repayment process. Too often we just scroll through the information and click “OK” without taking the time to really understand the huge financial undertaking we have accepted. It is our responsibility to understand where our money goes. Predatory loan companies rely on us being naive and uninformed.

It is equally important to make informed choices about our representatives, who can vote on whether or not regulations will be put into place to protect us from these loan companies. If student loan repayment protections are important to you –– and they should be if you’ve taken out any loans –– then you should consider that when casting your vote in the midterm elections. Look at how the candidates have voted in the past and what their stance on the issue is.

Doing so is the only way to ensure these powerful companies stop taking advantage of students.