Hear Me Out: 'Slime Rancher,' Courtney Barnett and loneliness in love 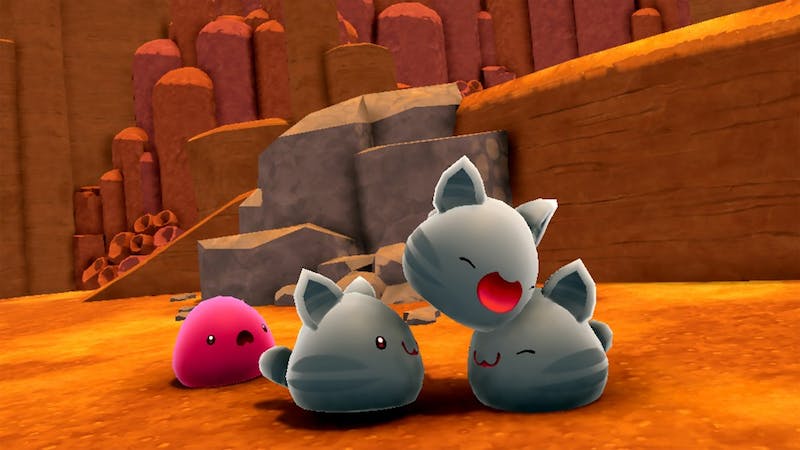 Editor’s Note: Hear Me Out is a column series consisting of cultural critique essays that dig deeply into pop culture items. These pieces may sound silly, nonsensical or like huge reaches; just stay with me and I promise they’ll always have an actual point by the end.

You wake up on an alien planet after a year of cryogenic sleep. You have a small house, a modest range to get familiar with and a vacuum gun, called a “VacPack.” There are pink smiling blobs hopping around you and they want to playfully bounce off your face. After wandering around your new home for a bit and feeding your new slime friends, you receive a letter from your partner, Casey, back on Earth, 1,000 light-years away.

“Slime Rancher,” a video game about ranching slimes on an alien planet, deceptively contains one of the loveliest and loneliest narratives in pop culture, as well as one of the most relatable for a generation built on new means of communication. Throughout the game, the character, Beatrix LeBeau, learns more and more about the special someone left on Earth, all while reading through a parallel love story of the man that once lived on the ranch.

Hobson Twillgers, the rancher who built the range Beatrix now lives on, left notes around the planet. These notes often contain helpful hints and tips on how to be a better slime rancher. As you progress, the notes slowly turn into a love story between Hobson and another rancher.

Hobson mentions how he came to this planet to learn more about himself, explore a new world and enjoy solitude, seemingly the same reason Beatrix came here. This all changed for him when he saw what would be his love for the first time.

“She changed how I saw things I guess,” one note reads. “Quiet wasn’t good enough anymore. I liked her laugh.”

The two stories – one in the past, one in the present – progress side by side. As the player finds more notes, they also receive more mail. The notes try to decide between living one’s own individual life or being with a lover as the mail rationalizes the decision to be apart.

“I guess that’s just us,” Casey writes in a letter. “What we really want just so happens to be in different parts of the known universe.”

At the end, Hobson decides to be with the woman he loves and Beatrix decides to stay on the range in solitude.

Courtney Barnett, a musician in the real world, lives a similar narrative.

She started Milk! Records in Melbourne, Australia and since released a double EP, a full album and, most recently, a collaborative album with Kurt Vile. Her songs are known for their witty storytelling style, ranging from the comical to the saddening.

She tours globally, often having to be separated from her partner, Jen Cloher, a great musician in her own right. Their relationship is frequently shifting from close to long-distance, never quite sticking to one. Both artists write songs on the loneliness of distant love and of choosing an individual path over living physically close most of the time.

In “An Illustration of Loneliness (Sleepless in New York),” Barnett laments this distance while laying up at night. She thinks idly in her boredom – “I lay awake at three, staring at the ceiling / It’s a kind of off-white, maybe it’s a cream” – before letting herself think about Cloher.

“Wondering what you’re doing, what you’re listening to / Which quarter of the moon you’re viewing from your bedroom,” she sings. The song reflects the distance and isolation of the relationship.

Cloher also sings of Barnett on some tracks, discussing the flaws of such an arrangement. On “Forgot Myself,” she cautions “There’s only so much you can say in a text / Reading between the lines is hazardous.”

Cloher and Barnett’s relationship serves as the middle ground of the two storylines in “Slime Rancher.” Instead of choosing between complete, solitary individuality and total togetherness, the two opt for a hybrid intercontinental long-distance relationship.

Many of us will have to make a decision like this eventually.

It’s also not an uncommon situation for freshly graduated students to have to choose between living with their partner and pursuing a career in a different city. These realities often get in the way of idealized relationships, and perhaps it is these realities that make the narratives of “Slime Rancher” or stories like Barnett and Cloher’s hit all the harder.

Millennials, faced with an intense desire for individualism and a job market that prohibits many from being too picky about location, are often forced to make a choice between these three storylines: Beatrix’s, Hobson’s or Barnett’s.

All three storyline choices face some level of isolation, either from another or from the self. But sometimes, you just have to decide which continent or which planet is best to live your life on.

Dan McKeon is the copy chief and can be reached at dan.mckeon@ubspectrum.com