A mother's charitable legacy lives on

Zubair Trabzada found out his mother passed away two months after it happened. He was 14 and spending a year in Orchard Park, N.Y. - living with a host family and experiencing high school in America.

When he returned to Afghanistan, his family told him the news.

The youngest of six siblings, and the closest to her, Trabzada was devastated. But it was more than a loss for himself.

Amina, his mother, was a staple figure in both his life and the lives of many Afghans. The wife of an important politician, Amina was known for her generosity. She helped dozens of widows and orphans around their home in Kabul - Afghanistan's capital. 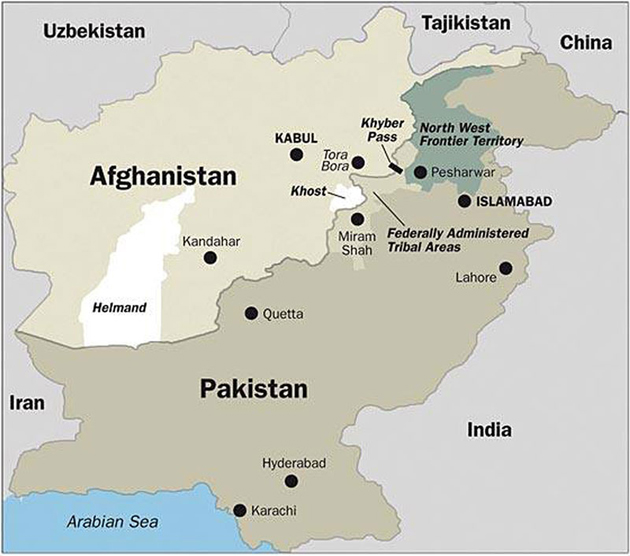 Losing Amina meant losing someone who fought poverty and hunger in the third-world country first hand.

In 2007, at 18, he returned to Buffalo and studied civil engineering at Canisius College. He transferred to UB in 2009 and started the Amina Foundation after graduating in 2012. Now, he's seeking to recreate his mother's generosity.

"That's the biggest goal in my life," Trabzada said. "Not to be somebody very rich ... but just to be able to be in a position where I could help the people of Afghanistan, my people and these women and children, who a lot of them don't even know about these wars or they have nothing to do with these, but they're suffering through it because of it."

What started as a mission to collect donations to send to his brothers overseas, who in turn bought food for widows and orphans in poor villages surrounding Kabul, turned into a movement at UB.

In November, five Middle Eastern UB students - Durgham Alyasiri, Sarah Hussain, Salma Attai, Syed Ali Adil and Ahmad Adil - and Buffalo State student Nilab Hussain joined Trabzada. Some of them have been refugees. Others have lost family members or been separated from them. They are driven to help because in their eyes, the widows and orphans of Afghanistan aren't so different from themselves. 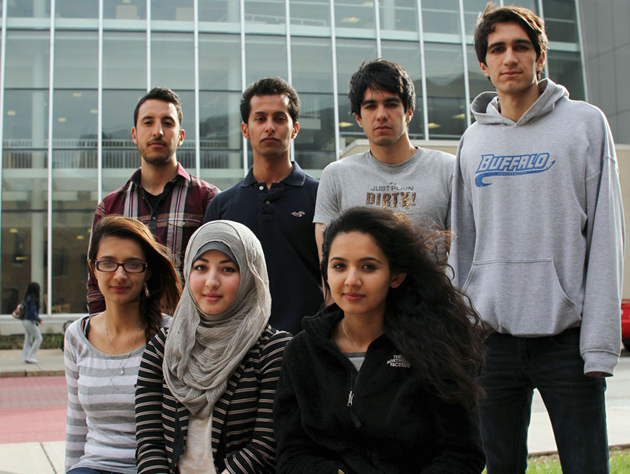 Durgham Alyasiri, a senior biology and health and human services major, met Trabzada at UB and helped lead the Amina Foundation. Born in Iraq and brought up in Jordan, Alyasiri was raised by a single mother - which drives his passion to help women and children who don't have a man to support their family.

"In the Middle East, where the more fundamentalists are, women are basically deprived of their basic rights, so they can't work," Alyasiri said. "Even if they're hungry and their children don't have food, they still can't go out and find a job. So they live on charity - that's how their whole life is."

The 23-year-old recalls what that's like. He relied on extended family in Iraq and Jordan for financial help. Joining the foundation came naturally to Alyasiri, who now works three jobs to help support his mother and family in addition to going to school full time. He says helping others is part of the Arabic culture.

He helped organize the Amina Foundation's first public fundraisers - a bowling event in March and a soccer tournament in April. He spoke in front of his classes, reached out to off-campus organizations and even asked professors for donations. 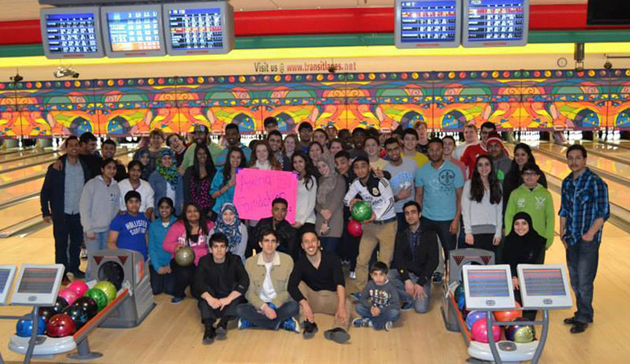 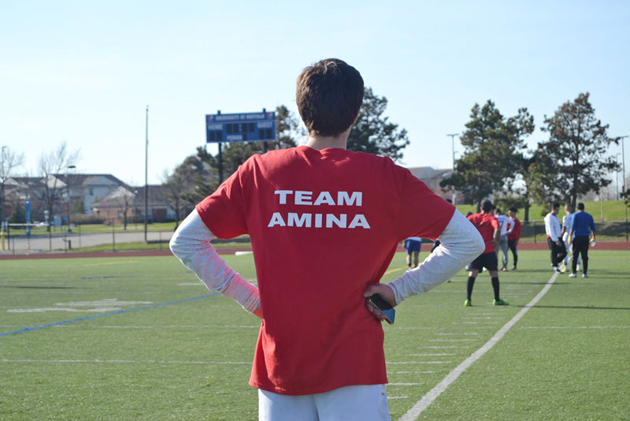 For member Sarah Hussain, her childhood experience of being a refugee fuels her passion for the Amina Foundation.

When Hussain was 5 years old, she and her parents left their home in Afghanistan to go to a wedding in Uzbekistan. They planned to vacation there for two weeks.

During those two weeks in 1998, the Taliban took over Afghanistan.

"It was not safe for our family to go back, so we just stayed in Uzbekistan," said Hussain, a senior biological sciences major. "It was difficult because we just planned to stay for two weeks; we left everything there. And not being able to go back to Afghanistan was shocking to us."

Hussain adapted to her new home, learned the language and made friends. But by the time she was 14, her father had signed up his family for a refugee visa. Her family's fate was out of their control - the visa could lead them to Canada, America or Australia. They ended up in Buffalo.

So when Alyasiri told his classmate Hussain about the Amina Foundation in November, she was immediately committed. Her life goal is to return to Afghanistan as a physician's assistant.

"At this moment, we're just doing financial [support]. So my plan was to become a physician's assistant and go back and help, but I don't have to wait until I become a physician's assistant. I can do it right now," Hussain said. "All you gotta do is just teamwork, and have the passion of helping, and I found those people. So we united and we're working on this project."

With that passion, the group has raised almost $6,000 since November.

Twice per week, Trabzada's brothers in Afghanistan provide $100 worth of food to a widow and her children - which, because of the difference in currency, is enough to feed a family of four to five for a month, according to Alyasiri.

Each weekend, when Trabzada's brothers drop off the food to a family, they take photos of the family holding a "thank you" sign, written to one person or family who made a donation. That's one of Alyasiri's favorite parts of the foundation - he said when he looks at the photos, he relates to the children. 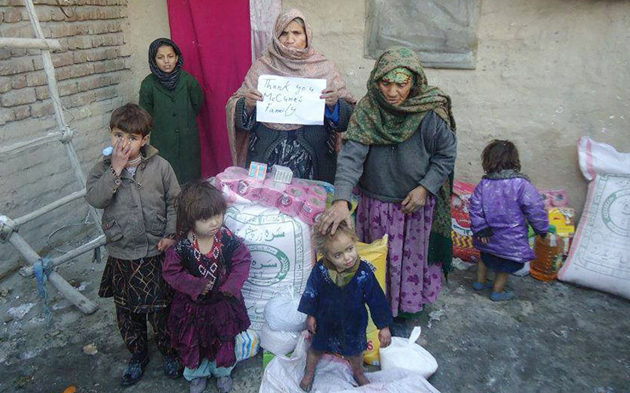 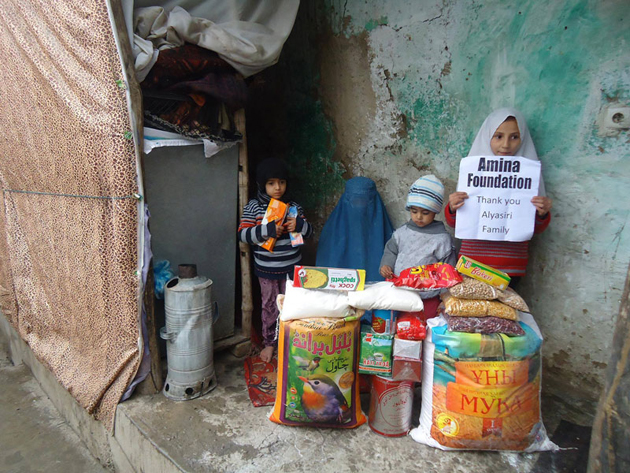 Just as Trabzada's mother did in Afghanistan and Pakistan, where his family fled during the civil war, his brothers give oil, rice, beans, potatoes and other cooking supplies and raw materials.

Before the Taliban seized Kabul from the Afghan military in 1996, a victory that began five years of Taliban rule in the capital and large parts of Afghanistan,

His family had a big house, nice cars and servants, whom Amina treated with kindness and respect. When the family fled to Pakistan temporarily during the Taliban's occupation, his family lost everything.

"Even when we went to Pakistan, I mean we had left everything, but [Amina] always had a great heart," Trabzada said. "She always found people who were in need around us. And every month, she would actually do the same thing. She would find a family who needed a lot of help, and she would provide them food - basically the same thing we're doing right now."

In fact, Trabzada's efforts are almost identical to his mother's - he focuses on widows and orphans as she did. He provides them with the same types of raw materials Amina did.

As he spoke about his mother's generosity, he recalled a story that made him smile. He and his mother were walking to a grocery store when she saw a woman coming out of a tent with her children.

"She actually said, 'Why don't you come to our house later on and I'll give you some raw food?'" Trabzada said. "And then she started giving her a little bit of oil, potatoes and onions and whatever. Then she said, 'You know what, every month, at the end of the month, why don't you come to our house, and I'll give you the supplies that you need for the rest of the month?'"

The Amina Foundation recently applied to be a Student Association club. In the future, members hope to be a New York State not-for-profit organization.

As a Muslim, Trabzada feels charity is spiritually nourishing.

He doesn't like much attention or credit. He emphasizes how the foundation's members, and their hard work, have been able to feed so many families.

For Trabzada, like it was for Amina, it will always be about others. 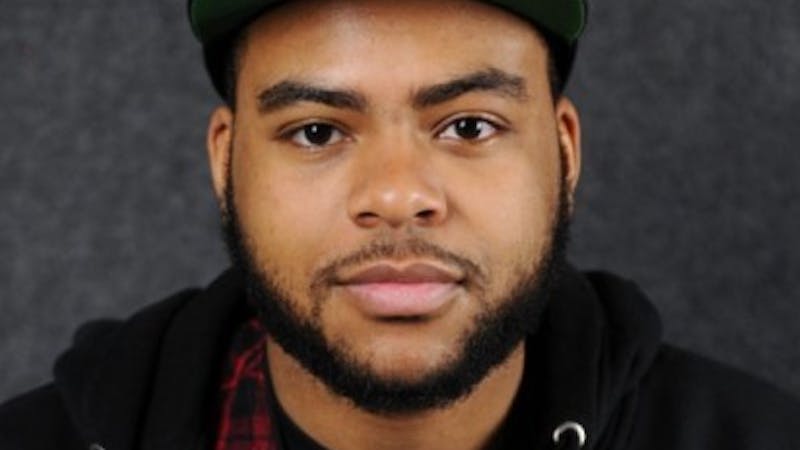 International student reflects on her time at UB