On Tuesday, voting began for the Student Association election. Undergraduates flooded the polls to choose between the Spirit and Forward parties.

The Spectrum polled 204 students, and the majority of them voted for Spirit's e-board.

"Spirit definitely has the backing of the current president, at least I believe so," Ciggia said. "I believe that they definitely are at an advantage in that sense, but at the same time, we're really trying to reform student government and really make it more about student needs and less about jobs and personal gain."

Though many SA staff members are voting for the Spirit Party, SA Assistant Treasurer Darwinson Valdez is voting for Forward. He said he would never vote for a party that chose Chhabria as a candidate because Chhabria "never finished a complete year in the finance department."

Chhabria was let go from his job as bookkeeper in SA's finance department under two separate executive boards. While many say he was fired on both occasions, Chhabria said in Friday night's treasurer debate he quit the first year because of "unprofessionalism maintained within the department."

"If one person did not completely fulfill their responsibility, that means the person that's running for president made the wrong choice," Valdez said. "Therefore, once you make one wrong choice in the organization, how can I trust you to make better choices for the organization once it comes to the future?"

Paul Basile, a sophomore intended communication major, voted for Spirit because of its better relationship with Black Student Union.

He thinks if Forward gets into office, the e-board will continue the ideals of the current office and "that wasn't working for most clubs."

"In terms of budget-wise or getting things done on time and if some people go over budget or run an event and don't get as much money back, how can we compensate? They're not really helping in that term," Basile said about the current e-board. "If anybody's part of a club, Spirit probably has the best interest in terms of making a difference in office."

Part of Chhabria's plan is to implement an emergency line that would hold $25,000, which clubs can borrow from while waiting for existing revenue to be added into their accounts.

Opponents point out the venture may be infeasible because this year's Senate would have to pass the line.

Tuesday was, all in all, filled with candidates attempting to increase voter turnout and gain last-minute voters.

Ciggia said he's been skipping his classes and not doing any homework, dedicating his time completely to his campaign.

"When I'm not here in the morning, I'm flyering, getting up at 5 in the morning and going to bed about 2 a.m., trying to contact any people that we believe will come out and support us."

Johns described his day as "intense, but enjoyable."

"Organized chaos," he said, describing the state of the Union. "All I see is a sea of red, so I feel pretty good."

The polls close Thursday at 5 p.m., and the 2013-14 e-board is expected to be announced on Thursday night. 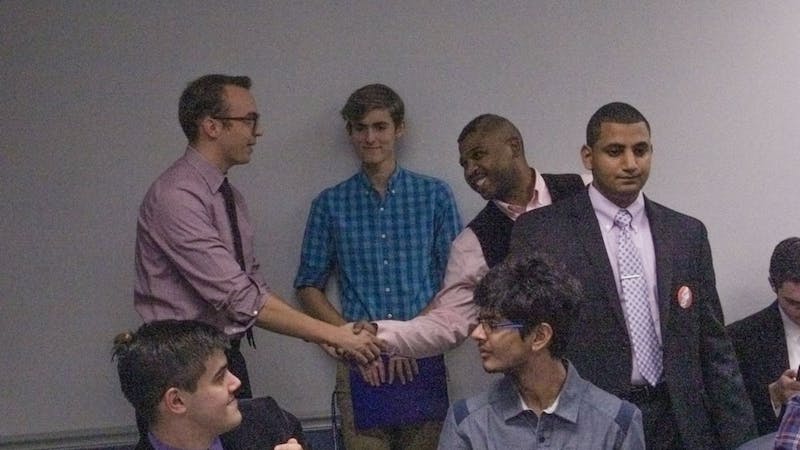 A Green solution to the Obamney duopoly

Nothing But Bull: Parody

It's tough being the third wheel