Despite having their season postponed, the Bulls are determined to be ready for the start of the season, whenever that may be

The Bulls are one of 54 NCAA Division I Football Bowl Subdivision teams not playing football this fall. It’s an adjustment for not only the players and coaches, but the university as a whole.

The Mid-American Conference postponed its fall sports season due to the ongoing COVID-19 pandemic on August 8th, with the Big Ten, Pac-12 and Mountain West soon following suit.

As 2020 marks the first fall season without MAC football, coaches, players and staff members have new goals in mind. Instead of focusing on this week's game plan, the UB football team is focused on safety, and that includes wearing masks and social distancing.

With hand sanitizer spread throughout facilities, masks being required at almost all times, and players being broken into small “pods,” UB is hoping to limit the spread of COVID-19 while also accomplishing all they can on the gridiron.

These “pods” are small position groups of players who work out and train with each other, and only each other all the time.

Johnson also noted that sanitizing is a very emphasized element of UB’s safety precautions, with players and coaches being required to sanitize whenever they enter different rooms.

“Every time you enter the training room or you enter the weight room you have to use hand sanitizer,” Johnson said. “We've been keeping everything clean and being smart about how we handle our business.”

For players, a daily routine consists of checking in with their designated pod of players, getting their training in, and leaving as soon as possible.

“To start the day, everybody in your pod is waiting outside the door for the check in time, because of all the different pods and different times it's really important that everybody's on time for everything,” Johnson said.

Players then walk in together as a pod, get their temperature checked and head to their assignment. Different players have different places to be as the team focused on distancing players even though they are in the same pod.

“You head to the training room for treatment or you head out to the field or weight room, whichever one you're going to,” Johnson said.

Players can’t hang around the facility for long or stay for extra work due to guidelines. They need to be out of facilities by a specific time so the next pod can enter.

“I think our administration, our sports medicine staff and our strength staff have done an outstanding job since our players returned,” head coach Lance Leipold said. “Symptom checking, temperature checking, [we’re] very pleased with the multiple times that we're able to test our athletes.”

Since the players got sent home in the spring, the team has had no meetings in person. All football-type meetings are being held over Zoom to prevent the gathering of  a large number of people.

This fall, the team is focused on individual weightlifting and training more than schematics and gameplans. Leipold said the team got the opportunity to hit the field and go through walkthroughs as well as offensive and defensive installs in July, before the season was ultimately postponed.

The opportunity to practice plays on the field and not through Zoom was great for the players, but came to a screeching halt when the season was postponed.

“[This fall] we’re going to do our strength conditioning, we're going to do some individual technique work, and then we'll build back towards the walkthroughs,” Leipold said. “Then get back to putting the pads on when they tell us, and I could see that happening in early October.”

Seniors and freshmen alike are all adjusting to the new challenges this season brings, with seniors having to alter their routine for their final season while freshman are simultaneously adjusting to college life and football.

After a stellar junior season that resulted in 8.5 sacks and First Team All-MAC honors, senior defensive end Taylor Riggins was said the postponement of the season was a difficult pill to swallow.

“It was definitely disappointing for everybody,” Riggins said. “But we're not the only ones that it’s happening to, it's happening in several other conferences and you just kind of have to handle the adversity, push through it and hope for the best in the future.”

Switching positions from quarterback to wide receiver, Dominic Johnson was looking forward to the challenge of improving at his new position and showcasing an offseason’s worth of hard work in games this season.

Though not as emotionally draining as the possibility of not having your final college football season, the freshman class has faced their own set of challenges.

“Based on some schedules and some other things there are a few veterans sprinkled in with them so they get it. The positive to it is by staying in the smaller groups a little bit longer, whether it be the strength coach, or the position coach, we're able to do a lot more one on one or small group stuff with them that they're getting probably more coaching attention at times than maybe they would at this time,” Leipold said. “We're trying to find the positives with it.”

Freshman defensive tackle George Wollo is adapting to college life amid a pandemic. When it comes to interacting with his new teammates, Wollo said he can only count on his hands the amount of times they have all been together.

“You kinda gotta just roll with the punches,” Wollo said. “I’m still getting adjusted to online school and everything.”

As for when the team looks to play football again, the consensus seems to be spring. Postponed conferences like the Big Ten are already looking to start their season as early as next week, while the MAC seems to be aiming for a return to play in spring.

“Right now, the plan is to start in spring, but (we’re) still waiting for an update from the conference and state guidelines that sort of thing,” Riggins said. “We're just taking it day by day with workouts.”

With news and speculation of a spring season swirling throughout the NCAA and the MAC, UB is hopeful that a season will happen. However, the team hasn’t gotten any news definitive enough that would change their current practice and training schedule.

Despite not having the entire team in the same place very often, Leipold and the coaching staff have placed an emphasis on sticking together and helping each other through a difficult and extended offseason.

Anthony DeCicco is the Senior Sports Editor and can be reached at anthony.decicco@ubspectrum.com and on Twitter @DeCicco42.

Anthony Decicco is the senior sports editor for The Spectrum. 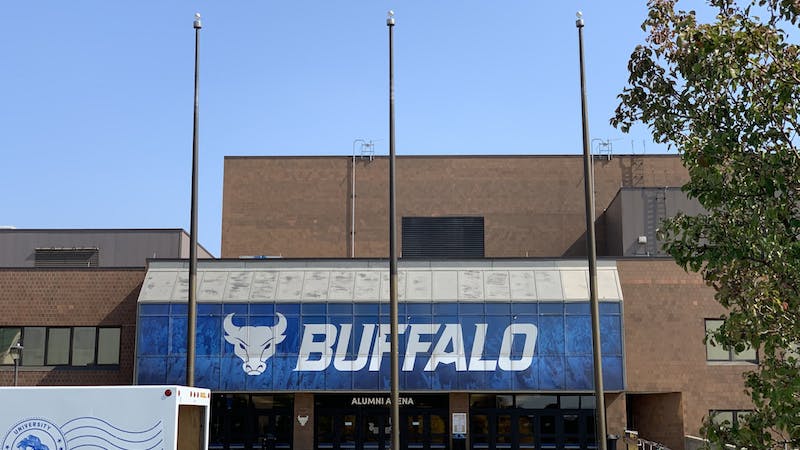 By ANTHONY DECICCO
11 minutes ago

By ROBERT SALISBURY
4 days ago