Coming off a 31-9 victory over Charlotte in the 2019 Makers Wanted Bahamas Bowl, the Bulls are poised to reach even greater heights in the coming decade.

Before they can get there, it’s important to look back at the players who shaped the 2010s.

The program, under Lance Leipold, has reached new heights, earning a double-digit win total in 2018 and now winning a bowl game in 2019.

Here’s a look at the players who made it all possible:

Jackson, coming out of high school, was ranked No. 37 for dual-threat quarterback recruits in the nation. At 6-foot-7, 245 lb., he possessed a cannon for an arm and surprising quickness.

He took over as starter in 2016 after redshirting in his first season. He struggled at first, especially with interceptions. Jackson threw 9 touchdowns and had 9 passes picked, as he led the Bulls to a 2-10 record.

During his sophomore year, Jackson battled injuries and inconsistent play. He developed a rapport with Anthony Johnson, who became his top receiver. The Bulls finished the year with a 6-6 record but weren’t selected for a bowl game.

Jackson entered the 2018 campaign with high expectations. He was ranked in the top 100 for NFL Draft prospects.

Jackson set career highs in passing yards (3,131) and touchdowns (28) as he led Buffalo to a program-best 10-4 record. He was named 2018 MAC Offensive Player of the Year for his efforts.

Jackson decided to forgo his senior year and enter the 2019 NFL Draft. In April, he signed with the Bills as an undrafted free agent. He was waived during final roster cuts. In October, he was selected in the 9th round of the XFL Draft by the DC Defenders.

Patterson signed with the Bulls as an all-purpose back in 2017, turning down offers from 10 programs, including Air Force and Navy.

He joined his twin brother, James, in signing with the Bulls.

In just two seasons, Patterson has emerged as one of the best running backs in MAC history. Sharing the ball with a crowded backfield, he has rushed for 2,777 yards and 33 touchdowns. In 2019, he ranked No. 3 in attempts, No. 5 in yards and No. 8 in touchdowns in the nation. He was named an honorable mention All-American by Pro Football Focus.

He has only played two seasons, but Patterson is already etching a place for himself as an all-time great at UB.

In 2017, the Bulls desperately needed a No. 1 receiving option.

From day one, Johnson was a threat on the outside. He had 1,356 receiving yards and 14 touchdowns in 2017, earning first-team All-MAC honors. In 2018, he and K.J. Osborn formed one of the most explosive receiving units in the entire country.

In September, he was signed to the Los Angeles Chargers practice squad.

Schreck came to UB as a two-star recruit from Medina, Ohio, but by the time he graduated, he had found a home at the next level.

After redshirting in 2012, Schreck made a name for himself as an athletic pass catcher. He led the Bulls in receiving yards (651), receiving touchdowns (4) and receptions (59) in 2016. He was named second-team All-MAC and to the John Mackey Award Watch List that year.

In 2017, the Cincinnati Bengals drafted him in the 7th round, 251st overall. He is currently in his third season with the team.

In high school, O’Hagan was the top-ranked heavyweight wrestler in New York. He was also a four-year starter on both offense and defense.

O’Hagan rewarded the Bulls by becoming a leader on the offensive line. After a shaky start in 2015, he emerged as one of the top pass-blocking centers in college football history, according to Pro Football Focus.

In 2017, O’Hagan allowed just two hurries and zero sacks. He was a crucial part of the Bulls’ historic 2018 run.

As a student at Grover Cleveland High School in Buffalo, Means was a multi-sport athlete who earned a number of All-Western New York accolades.

He signed with the Bulls in June 2008, opting to stay local. He became a starter midway through his freshman year, earning 5.0 sacks and 25 total tackles. Over the next three seasons, he started every game, finishing fifth in school history and 21st in MAC history with 19.5 quarterback sacks. He also ranks 10th in school history in tackles-for-loss (30.5).

Following a successful four-year career at Buffalo, Means was drafted by the Tampa Bay Buccaneers in the fifth round of the 2013 NFL Draft. He has played in the league ever since.

Sokoli was a two-star recruit from Bloomfield, NJ, before signing with the Bulls in 2010.

Sokoli made a name for himself as a fast-footed (he ran a 4.84-second 40-yard dash at his pro day) lineman. He is surprisingly agile for his 6-foot-5, 290 lb. frame. He recorded 95 total tackles and 15.0 tackles-for-loss over a four-year career.

He was drafted by the Seattle Seahawks in the sixth round of the 2015 NFL Draft. He played for multiple NFL teams before the DC Defenders selected him in the open phase of the XFL Draft.

Mack is one of the most productive players in Mid-American Conference history, but few saw it coming.

In high school, Mack was a two-star recruit from Fort Pierce, FL, after playing quarterback. He initially expected to get a basketball scholarship, but injuries forced him onto the gridiron. He ended up making millions as a result.

Over a four-year career, Mack rewrote the UB record book. He ranks No. 1 in program history in sacks (28.5), forced fumbles (16) and tackles-for-loss (75). He was named a second-team All-American by the Associated Press and the 2013 MAC Defensive Player of the Year. He is the NCAA all-time leader in forced fumbles. He is also tied for the all-time lead in tackles-for-loss.

Mack was one of the highest-rated prospects in the 2014 NFL Draft coming out of college. He was ultimately selected in the first round, fifth overall by the Oakland Raiders. After winning a Defensive Player of the Year award and being named to multiple pro bowls, Mack was traded to the Chicago Bears, who signed him to the largest contract for a defensive player in league history.

Not too shabby for the UB alum.

Johnson was lightly recruited out of high school, with most interest coming from the NAIA level.

He chose to gamble on himself, joining his mother’s alma mater as a walk-on linebacker. He was quickly moved to cornerback, where he earned the starting job in his sophomore year.

Johnson enjoyed a very productive career. He was named to the 2013 Jim Thorpe Award Watch List. He was named first-team All-MAC that same year. He made SportsCenter Top 10 for an interception against Bowling Green and was hired as a NFS scout for the Houston Texans.

Johnson ranks No. 2 in program history for passes defended, with 38.

Justin Weiss is a senior sports editor and can be reached at justin.weiss@ubspectrum.com

Justin Weiss is the managing editor for The Spectrum. In his free time, he can be found hiking, playing baseball or doing both at the same time. His words have appeared in Elite Sports New York and the Long Island Herald. 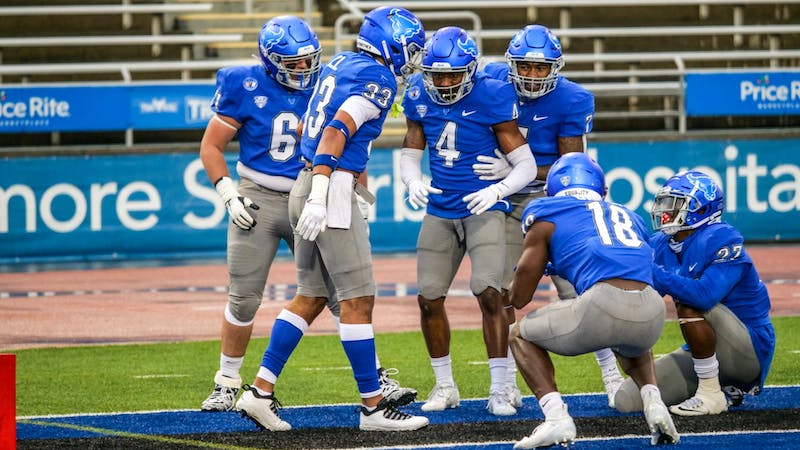