Get to Know an Opponent: Temple

The Bulls to take on the Owls at UB Stadium

The Bulls return to UB Stadium Saturday afternoon as underdogs against the Temple Owls.

Coming off a 20-17 victory over then-No. 21 Maryland, the Owls are a formidable challenger to the Bulls, who struggled in a 35-17 loss to Liberty Saturday. The Owls have received seven votes in the AP Top 25 and Coaches Poll, after defeating Bucknell 56-12 in week one and Maryland in week three.

The Owls made national headlines last winter for cycling through three head coaches in the span of a month. On Dec. 13, the Owls hired Miami defensive coordinator Manny Diaz to replace Geoff Collins who Georgia Tech hired unexpectedly. On Dec. 30, after Mark Richt’s unexpected retirement, Diaz returned to Miami Gardens, despite never coaching a game in Philadelphia. On Jan. 10, Temple hired Rod Carey, who coached Northern Illinois to a MAC Championship Game win over Buffalo.

Last September, the Bulls and Owls met at Lincoln Financial Field. Quarterback Tyree Jackson passed for 275 yards and three touchdowns to lead Buffalo to a 36-29 victory and their first 2-0 start since 1983. Both teams ultimately qualified for bowl games and landed players on NFL training camp rosters.

Here’s what to expect when the Bulls take on the Owls at 3:30 p.m. Saturday:

The Owls started off last season with losses to Villanova and Buffalo but never hit the panic button. Over the next ten weeks, they earned victories over Maryland, Houston and No. 20 Cincinnati. Ultimately, they went 8-5 and earned an invite to play Duke in the 2018 Independence Bowl.

Quarterback Anthony Russo had an up-and-down 2018 season, taking over as starter against Maryland and completing 57.4% of his passes for 2,563 yards, 14 touchdowns and 14 interceptions. He found a spark with receivers Ventell Bryant (51 receptions for 690 yards and 3 touchdowns) and Branden Mack (44 receptions for 601 yards and 5 touchdowns), who helped the Owls’ offense record 34.9 points per game.

Running back Ryquell Armstead was named first-team All-AAC after rushing for 1,098 yards and 13 scores on 210 carries. He was assisted by left guard Jovahn Fair, who anchored the offensive line and was named second-team All-AAC. Behind strong offensive line play, the Owls averaged 410 yards per game, ranking No. 61 in Division I-A.

On the other side of the ball, the Owls had six players named either first or second-team All-AAC. Safety Delvon Randall led the team with 85 tackles and four interceptions, before signing with the Philadelphia Eagles in late April. Temple had five players record two or more interceptions in 2018 –– safety Benny Walls, cornerback Linwood Crump, cornerback Rock Ya-Sin and linebacker Shaun Bradley.

Defensive end Michael Dogbe was a seventh-round pick by the Cardinals, after recording 72 tackles, 12.5 tackles-for-loss and 7 sacks. He joined Quincy Roche (57 tackles, 9.0 tackles-for-loss and 6 sacks) on what was a ferocious defensive line. Geoff Collins has long been a defensive-minded coach, and his final season in Philadelphia proved not to be an exception.

Carey has gotten off to a terrific start at Temple, leading the Owls to impressive wins over Maryland and Bucknell. He has experience as an offensive coordinator and offensive line coach, a change-of-pace from his predecessors in Philadelphia.

Russo got off to a quick start, completing 66.7% of his passes for 686 yards and 7 scores. He has connected with Jadan Blue and 2018 AAC Special Teams Player of the Year Isaiah Wright on multiple touchdown strikes.

On the other side of the ball, defensive tackle Ifeanyi Maijeh has 11 tackles and a team-leading 3 sacks. Meanwhile, cornerback Harrison Hand leads the team with 12 tackles and an interception. Over the first three weeks of the season, Temple has given up just 29 combined points as they look to keep on winning.

The new-look Owls enter UB Stadium as heavy favorites, as they vie for their first top-25 ranking since 2016. On the other sideline, the Bulls are looking to end non-conference play with a much-needed win. For Buffalo to have a chance against the high-flying Owls, they will need to lean on the arm and legs of redshirt freshman quarterback Matt Myers. Like the rest of his team, Myers has flashed greatness — but also signs of trouble. The Bulls will have to put it all together to have any chance against the Owls on Saturday.

Sports desk can be reached at sports@ubspectrum.com 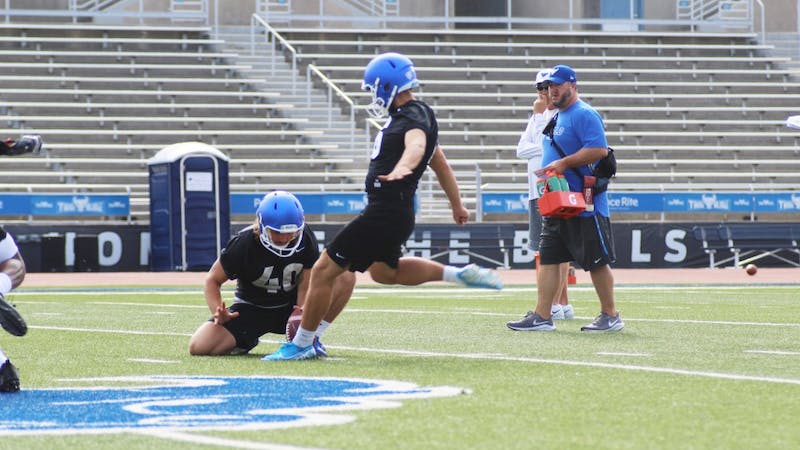