Letter from the editor: Looking to The Next Generation 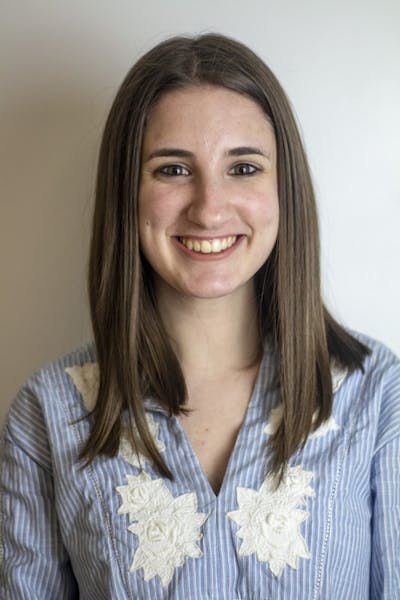 One ambitious and enthusiastic English major looking to find a voice on a campus large enough to be its own city we call UB.

I walked into The Spectrum office the first day of my freshman year.

I wasn’t fully prepared or ready for the task, but I promise you the experience has been worth every word on every Spectrum page.

I have had the rare privilege to serve as your editor-in-chief for the past two years. It has been an honor to lead, help tell your stories and be a voice for you on campus.

Nothing is quite like the adrenaline of working on a breaking news story on deadline, editing an investigative piece or the satisfaction of seeing change take place because of those stories.

And nothing is quite like walking out of the Student Union from a 20-hour production day at 5 a.m. from putting the paper together for print and seeing a gorgeous Buffalo sunrise with the few remaining loyal editors who stuck out the entire work day to be the last eyes on the paper with you.

The majority of my time as EIC has mostly been behind-the-scenes. I’ve edited and worked on just about every Spectrum story as EIC, mentored dozens of staff writers and editors, and defended stories and campus issues to administration. All the while sometimes missing a class or two so I could juggle the weight or have lunch with UB President Satish Tripathi and UB Spokesperson John DellaContrada.

My job has been about “shining light in dark places,” as my adviser says, which is mostly always harder than it sounds. It’s also about highlighting issues you care about, holding public officials accountable and telling other people’s stories -- not mine.

But four years ago, I began as a quiet staff writer anxiously ready to take on every story, sometimes more than I could admittedly balance, but I knew I wanted a larger role at the paper.

At the end of freshman year, my then-EIC Tom awarded me with the “Star Trek Award: for the editor most likely to lead The Spectrum in The Next Generation.” It was my college dream to be EIC and I never imagined I would have the extremely rare opportunity to do it twice.

I knew going into the role I had so much to learn -- I had to prove myself. I’m extremely grateful to have had a support team of Spectrum alum and professionals in the field -- Matt, Luke, Gabi and Sarah -- who’ve closely mentored me, guided me through some of the toughest decisions I’ve ever made and who’ve always brought me back to what matters most.

I’ve had to live up to the legacy of our 68-year-old paper and the editors whose hard work has allowed me to be in this position in the first place.

Each year, I’ve slowly watched the graduating senior Spectrum editors leave and I felt the weight of their absence as a responsibility to make them proud.

I’ve been meeting with administration for the past two years about Spectrum funding, which we’ve been without for about seven years, and I sincerely hope this will happen one day soon.

I’ve been thinking about this goodbye column every now and then because in the back of my mind I’ve always wondered if I would have achieved what I came here to do by the end of my four years.

I’m constantly reminded of my parents’ words of advice when I began working here -- to work as if I were working for The New York Times and to find balance.

I’ve tried my hardest to carry this mentality with me, even in the countless hours I’ve spent obsessing over the paper on the phone to my parents or when I get home from a long day to rant to my overly patient suite mate Hannah, who hopefully never gets sick of my stories.

And to the person who always reminds me to eat and take care of myself. Helene, thank you for always having your office door open for me and being there for me no matter what. You have helped make Spectrum a home for me.

I’ll also never forget the Spotlight team, our late night/early morning breakfast trips after production days, countless coffee breaks in the office with former copy chief Dan. Or David’s killer movie guides and when he would catch me up on almost every movie and pop culture reference. Or Pierce singing show tunes in the office all-night-long. And Sarah’s pep talks. I’ve gotten used to The Spectrum flow and it’s consumed me these past four years.

I will forever look back at my time at The Spectrum as my highlight at UB and I have my journalism adviser, Jody Biehl, to thank. Her tough criticism has molded me into a stronger person and journalist. I’ll always be grateful for her endless wisdom.

I began here because I wanted to be able to look back on my college career and be able to define it by stories -- I didn’t want the weeks and years to blend together or as a time where I wish I did more.

I’ve also had the opportunity to tell some powerful stories, such as the most meaningful story I’ve ever written on UB’s fallen athlete, Solomon Jackson.

As I’ve looked up at his story above my Spectrum desk for the past two years, I’ve thought about his story and the legacy each of us creates with our actions and stories each day. I still keep in touch with his family, which has also taught me how meaningful relationships are and can be.

My staff and I have learned countless lessons together like this over time.

And now onto The Spectrum’s Next Generation. Brenton, I have good faith in you as EIC and I’m excited to see what you do.

More than 3,000 stories in 220 papers in four years -- I’m truly proud and humbled for what my entire staff and I have achieved each year. It has been quite the experience.

While you have your college career in your hands, you have the choice to make the experience as meaningful as you wish with the work you do.

And I hope you make each week, every story and every word count.

P.S. I have two more Spectrum stories coming in the summer and fall, so don’t forget my name just yet.

By JACKLYN WALTERS
5 hours ago