The three-goal performance was led by senior forward Carissima Cutrona and sophomore forward Marcy Barberic who combined for 3 goals and 3 assists. The Bulls (6-1, 0-0 Mid-American Conference) have wins over the Canisius Golden Griffins (3-2-1) the Niagara Purple Eagles (4-3) and now the Bonnies (0-5-4) this season. The win marked the final non-conference game of the season and the best non-conference record the Bulls have had since 2015.

“I don’t want to take anything away from the other programs but results speak,” Head Coach Shawn Burke said. “This is the standard year in and year out and we always want to win these Western New York games. We will see what the rest of the season has and let the results speak for themselves.”

The Bonnies started the game with early passing errors that Buffalo took advantage of, leading to a Cutrona goal off a blocked shot from Barberic 8:05 into the game. The Bonnies continued to make errors leading to another Buffalo goal from Barberic when she shot the ball off the left post at the 24:28 mark. Cutrona earned the assist on the play.

“Carissima and I have been practicing our combinations up top day in and day out and it had lead to our success on the field,” Barberic said.

The Bulls started to have issues when freshman defender Tess Ford earned a yellow card after running into a St. Bonaventure player. The Bonnies continued its effort, leading to a goal off of the Bulls’ scheme troubles during the 30:40 mark of the game. St. Bonaventure senior forward Mariah Marrero earned her first goal of the season off the play.

The Bonnies would earn a yellowcard when freshman midfielder Tsianna Barnwell collided with two Buffalo players 44:09 into the game. The Bulls had a scare at the end of the first when junior midfielder Mairead Martin went down with an injury. Martin was able to walk off the field with no support.

“It is with all the help of my teammates,” Cutrona said. “My team does a really good job of setting things up and the chemistry we have with each other is the reason I have a chance to get those goals.”

It didn’t take the Bulls long in the second half to find the net as Cutrona would earn her second goal blasting the ball past the goalie’s left side 49:55 into the game. The goal would earn Barberic her second assist of the night. The Bulls would continue the pressure over the next twenty minutes, having three solid goal opportunities but failing to score.

The final 25 minutes saw the Bulls and Bonnies exchange control with junior defender Gurjenna Jandu making key saves. The Bulls would go on to earn its second yellow card of the game off of some hard play from Jandu at the 78:22 mark. Still that wasn’t enough to stop the Bulls as it would go on to secure the 3-1 lead.

“I think our defensive principles are really strict and we just need to follow our discipline,” Barberic said. “If we can just focus on that we will just keep getting better and better.”

The Bulls only allowed 3 shots on goal while having 11 shots on goal against the Bonnies. Freshman goalkeeper Emily Kelly earned her sixth performance this season allowing one goal or less. Cutrona moved in to being the sixth overall point earner in program history with her performance Friday night.

“I thought the start was fantastic,” Burke said. “We were playing really well and then we just fell asleep. Hopefully we can come out of it and move forward, we didn’t overly pay for it. I thought St. Bonaventure fought to stay in it to the end. I want to see us get the fourth goal and put the dagger in the game early.”

Burke said he plans to focus more on defensive schemes in practice as the team had not regularly worked through them lately. Buffalo has its next game on Sept. 21 where they will start conference play on the road against the Northern Illinois Huskies (1-7, 0-0 MAC).

Thomas Zafonte is the senior sports editor and can be reached at: thomas.zafonte@ubspectrum.com & @Thomas_Spectrum 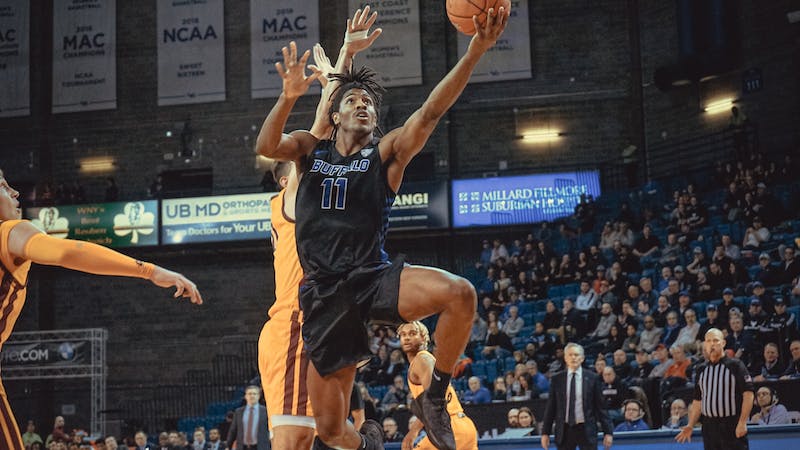