The men's basketball team opened its season on Friday night, but they couldn't close.

It was Bobby Hurley's first game as a head coach.

"We were competitive for stretches [Friday night]," Hurley said. "It just didn't all come into place, but I feel good about us moving forward behind this game."

"We did a pretty good job defensively in the first half, [but] we had some breakdowns late in the half that cost us," Hurley said. "There's a big difference going into a half down two or up two to being down eight. And we didn't finish the last few minutes very well."

Hurley was tested in his coaching debut, having to shuffle the Bulls' rotation around as senior forward Javon McCrea and senior point guard Jarod Oldham both got into foul trouble early in the second half.

The Bulls struggled offensively in Hurley's new system, shooting 31.2 percent from the field (20 of 64).

"Offensively, the guys are still learning and adjusting to a new system so it wasn't as clean as I would have liked," Hurley said. "Our field goal percentage is indicative to that."

The schedule gets easier from here, as Texas A&M may have been the toughest opponent Buffalo will face all year. The Bulls travel to Niagara (0-1)on Wednesday. Tip is set for 7 p.m.

Women's basketball coach Felisha Legette-Jack preached the importance of defense to her team this offseason. Her players seemed to have understood and locked in Friday night, forcing 17 turnovers and holding Binghamton to 26.4 percent shooting, including 17.2 percent in the first half.

The Bulls (1-0) won their opening-night contest, 65-47 at Binghamton (0-1). Sophomore guard Mackenzie Loesing led the scoring with 16 points in just 18 minutes.

Ten of 12 Buffalo players scored in the victory. Senior point guard Margeaux Gupilan scored 15 points on 5-for-7 shooting, including 3 for 5 from behind the arc.

"This is the kind of toughness we want to continue to display throughout the year," Legette-Jack said.

"I liked the fact that we really focused on the box-out and it led into transition and [scores]," Legette-Jack said.

Buffalo controlled the paint throughout the game, finishing with a 48-39 edge on the boards and outscoring the Bearcats 24-14 in the paint.

The largest lead of the contest came with 4:13 remaining as junior guard Sloane Walton hit one of her two 3-pointers of the evening. She finished with 10 points.

"This was a pretty good team that can score and to hold them to 47 points, give credit to our team to trust in the system and be ready when their number is called," Legette-Jack said.

The Bulls will remain on the road as they travel to Youngstown State (0-1) on Wednesday. Tip is set for 7:05 p.m. 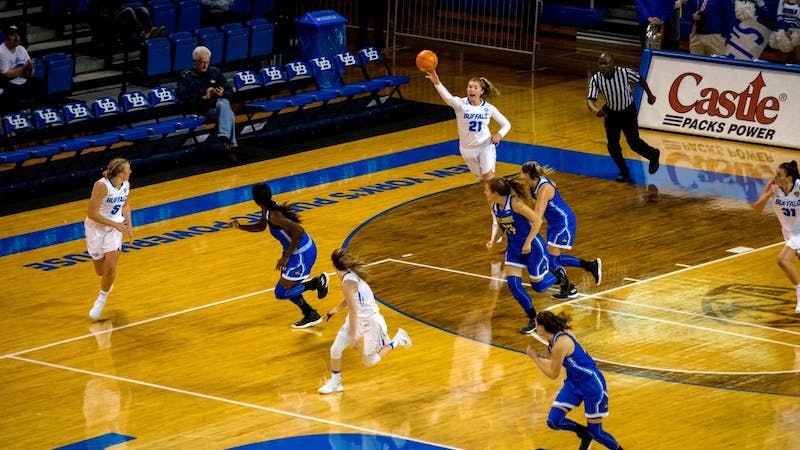 The Edge: Buffalo vs. Central Michigan

By THOMAS ZAFONTE
838 days ago

By THOMAS ZAFONTE
838 days ago

By QUENTIN HAYNES
1504 days ago

By QUENTIN HAYNES
1529 days ago