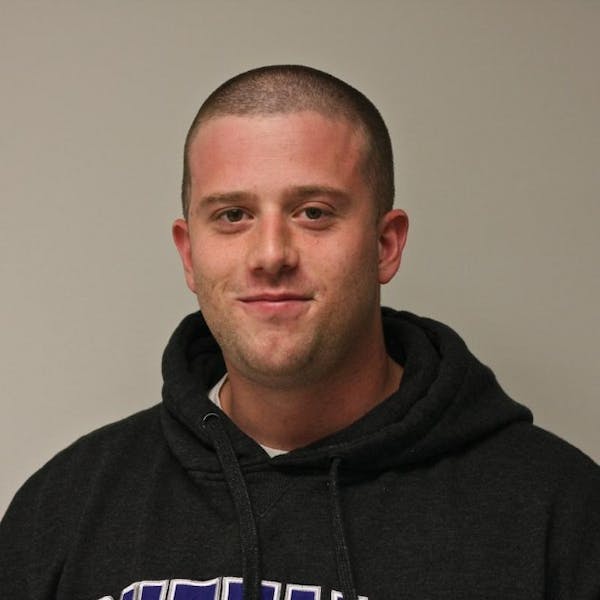 The day a part of me was jump-started; a part of me that was dormant for over a decade. It wasn't a very spectacular day by most accounts, but for me it was the starting point for redemption.

That day was my first day of classes at UB.

To fully understand what I'm talking about, I have to take you on a little journey into my life. Bear with me.

I never graduated high school. That's right, I have my G.E.D. The three-letter word that's haunted me since I dropped out of high school in 1999. There were reasons. I could list them all off right here, but that's the past and I've learned to move on from it.

I will tell you that I never really took to school. I liked to play sports, hang out with my friends, watch movies - I even sang in my high school show choir (not as scary as you might think, but surely I was no Danny Zuko). The problem was that I just hated doing schoolwork.

After I dropped out, I spent the next six years on autopilot. I had a couple jobs that I hated but that allowed me to drift to the outskirts of society. I was comfortable there for a while - miserable, but comfortable.

Then one day - I couldn't tell you an exact date - it hit me. I had to be a writer. I don't know where it came from or how I hadn't realized it before, but it was like I was born again with a purpose for my life.

But there was a problem - to be a writer I had to go to college and to go to college I had to be accepted. Thankfully Erie Community College opened its doors. For whatever reason, ECC gets a bad rap around Western New York, but I really enjoyed my time there. It's there that I found journalism. It's there where I started to realize I might have a future.

So I busted my ass for a year and a half and earned my way into UB - the school that probably laughed when it got my transcripts and application almost two years prior.

That's why Aug. 28, 2008 was so special. It was validation. It meant I was worthy of setting my sights on something better. I knew that day that I wanted to be a writer, but it was what I learned the following four years that made me worthy of such a distinction.

My time at UB has been packed with frustration and obstacles. To make things even worse, I started out as a 26-year-old freshman. When I walked into the first Spectrum class and was surrounded by 40 early 20-somethings, I knew breaking in to the culture was going to prove to be a challenge. I mean, how awkward do you feel when you get stuck with an adult learner in a group project?

Let me clarify - there's nothing wrong with going back to school when you're older (look at me), but it's no secret that the gap between generations is unavoidably awkward at first.

I was working under editors at the paper that were like five, six, sometimes even seven years younger than I was and it was humbling. Especially when I was passed over for a promotion after my first semester by a 20-year-old. It turned out to be the best thing that ever happened.

That person was former Editor in Chief Andrew Wiktor - one of the most important people in the history of The Spectrum, and a friend of mine. He gave me a chance almost two years after leap-frogging me and allowed me to run a desk as senior sports editor. It was a dream come true.

If you know me at all, you know how I bleed UB True Blue. Some people come to UB and leave remembering their classes or the clubs they were in, I will leave remembering the memories provided by Byron Mulkey, Mitchell Watt, and Javon McCrea. Those guys were a huge part of my UB experience. It's truly a great experience when you're able to meet great people in the sport that you love. It kind of reignites the passion for it all.

When I was elected editor in chief - after accomplishing more than I ever expected - my journey became even clearer. I finally realized that part of being worthy of calling myself a writer. I finally understood the responsibility that came along with it. I wanted to tell people's stories and somehow impact people through my words. I accepted something - The Spectrum - as something bigger than myself; something so important that it required my undivided and unrelenting attention and dedication.

I don't like singing my own praises; in fact I never do it. But I think it's important to mark this time in history for this paper. I've seen it slowly develop into an award-winning and well-respected publication over the course of my four years here, and I want to take this time to recognize the people that have scratched and clawed to get us to this point.

Wiktor was the visionary that set everything in motion. He changed the way we did things and the expectations for everyone that stepped foot in 132 Student Union. I just kept it going. I couldn't have done it without Luke Hammill - the best journalist I've ever worked with. He's made me so much better in the short time I've had the chance to work with him, and I will cherish the bond we've built because of it.

Lauren Nostro was my first real friend and professional confidant at the paper, and she's been there for me even after leaving for greener pastures in New York City. James Twigg was my number two all year and stood by me when times were tough and others ran. I can honestly say that Twigg is one of the most loyal and hard-working people I've met at UB, despite the fact he's had to deal with me for 50 hours a week for a year.

Aaron Mansfield is the next in a long line of sports editor to EIC, and you couldn't be getting a better leader or journalist to continue The Spectrum's mission. He's been my prot?(c)g?(c) since the day I met him and his work ethic and care for UB and the city is Buffalo will shine for years to come. Brian Josephs: now there's a success story, folks. The most determined, kind, giving, funny, and dedicated person I've met in my time at The Spectrum. I wish I could put a little bit of him in everybody at the paper.

Pino, thanks for all the dashes. Your lunch-line companionship will forever be considered legendary in my book. Rebecca Bratek, thank you for your unfaltering dedication to this paper and I can't wait to see what you have to offer next year. Aline Kobayashi, Meg Kinsley, and Nicole Manzo - my wife is probably the only one who knows how truly special you all are for being able to deal with me for a whole year. Benoit, wink wink buddy. Bowe, you're a sick man - but we wouldn't have you any other way. Cady, Feiler, and Boogie: thanks for stepping up. The great sports tradition lives on after your semester.

I don't have enough room for everybody, but there are three more people I have to thank. I want to say thank you to Jody Biehl, our advisor who believes in every one of us, every day, when nobody else does. A person who has revived a journalism program here at UB that remains on live support despite her unbelievable efforts. I haven't had another instructor at UB or anywhere else that puts more time in or cares more about his or her students. Everything we accomplish has her fingerprints all over it, as will happen with a good teacher.

I can't get out of here without sending out a super big thank you to The Spectrum's savior - our office director Helene Polley. Her work ethic, passion, and love for students have saved the paper from sure extinction.

I couldn't finish a thank you column without mentioning my beautiful wife. Let me just say that I won the wife lottery. The simple fact that she's still with me after this year is a testament to her ability to always put others before herself. She's my best friend and my editor. (Yes, that's right. She's the editor in chief's editor!) I'd be lost without her.

We kind of got off track here, but I think it's important to leave this for those in the future, so that they can realize the importance of this institution and the people toiling within its walls.

I want to say thank you to UB. Despite my constant disappointment in the apathy and SA ineptitude, this is a special place with a lot of special people.

So now I leave UB, hopefully returning a few of the gifts it gave me through the stories I wrote. The people in those stories are the ones I hope get remembered. It's their inspiration that impacts people, and that's what I came here to do and what I hopefully will be doing after I leave.