When Zach Filzen arrived on campus after transferring from Northern Arizona in 2008, nobody had a clue as to how good of a player he would turn out to be.

I have to admit that even I thought he'd never amount to much. He played 20 games his sophomore season and seemed like too much of a defensive liability to ever play significant minutes for a coach in Reggie Witherspoon who puts a lot of emphasis on defense.

Man was I wrong.

It's no secret that Filzen is the most deadly shooter in the Mid-American Conference, but I'll argue that his play has been even more impressive this season than a year ago.

Surprising? It shouldn't be.

Let's just look at the numbers, shall we? Last season, Filzen was unconscious from three-point range, making 110 three's which was good for the second best total in MAC history. Last year was an incredible one for Filzen, but he played in 34 games and averaged 3.23 triples per contest. Compare that with his 82 3-pointers this season in 27 games good for a 3.03 average, and you'll notice there's barely been a drop off.

Filzen has heard the whispers, wondering what's happened to his shooting stroke. He's even his own harshest critic.

"I have a lot of high expectations of myself and I'm not real happy with the way I've been shooting the ball, especially during the conference season," Filzen said.

How bad is he shooting in conference, you might be wondering? He has 39 3-pointers, good for second best in the MAC. Most guys would give almost anything to shoot as well as Filzen does on his worst day. It's also noteworthy that senior forward Mitchell Watt has doubled his scoring average from last season, going from eight points a game to nearly 16 this year. He has 289 field goal attempts in 27 games this year compared to only 220 in 34 games last season.

What makes Filzen's game more impressive this season is the way he's adapted to how teams play him, and the way he has stepped up on the defensive end of the floor. He went from being a 19-year-old defensive liability to someone that has been a factor at times this season against good offensive guards.

"On the defensive end I think I've gotten a lot better," Filzen said. "I'm making plays whether it be for a teammate or by going to the basket. Teams are always going to be focused on me taking jump shots…so I have to mix it up…When I struggle to shoot the ball I try and find other ways I can help and that gets me going a bit."

Filzen's work ethic is what makes him a guy that fans can root for. He's a player and a person that you cheer for because you know how much he cares and the quality type of individual he is off the court.

Witherspoon saw that Filzen was a tough competitor early on in his Bulls career.

"He is very quietly competitive," Witherspoon said in February 2011. "He really has an innate desire to do really well…he wants to be at his best at all times."

Filzen's best has been a treat for Bulls fans to watch throughout his career, especially at Alumni Arena. He's brought the fans to their feet consistently in the past two seasons and on Saturday evening he hopes to do it one last time.

On the bus ride home from Akron after one of the biggest road regular season victories in UB history, Filzen talked about the final game of his career at Alumni Arena with his teammates. They talked about how amazing it would be to see a packed house because of how much energy the team gets from True Blue and the sixth man.

"I think we have a team worth watching with a lot of talent," Filzen said. "It's a special group that works really hard and plays together…I hope it's loud and it's crazy because we need that."

No matter what happens this season on the court, Filzen will leave Buffalo with a place in Bulls fans' hearts forever. He did it the right way and he has no regrets. He'll remember the school, but more importantly the people he's met – including his fiancé – that have had an impact on his life.

"It's an experience that I will never forget," Filzen said. "I'm hoping to finish it strong. That I can finish strong individually and I can get it going and play up to the best of my abilities. If we can reach our goal it will be an amazing finish to my time out here."

I can't think of a more fitting farewell for Filzen. 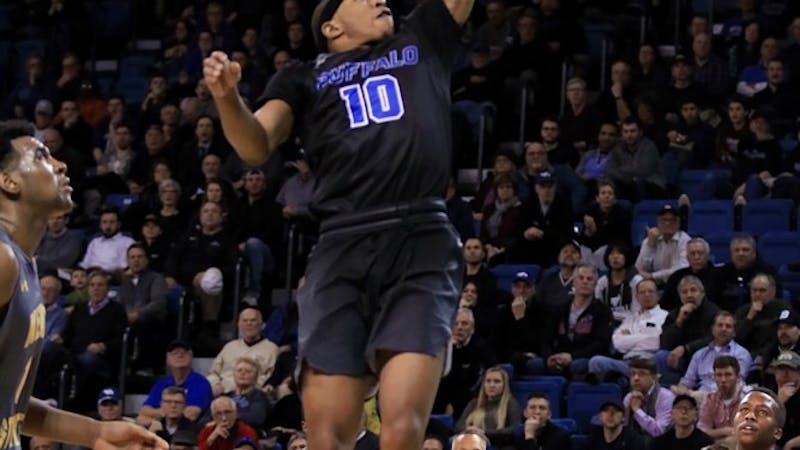 By NATHANIEL MENDELSON
1000 days ago

By DANIEL PETRUCCELLI
1004 days ago

By THOMAS ZAFONTE
1004 days ago

By THOMAS ZAFONTE
1014 days ago