Welcome to the future

With the conclusion of the NFL draft on Saturday afternoon, the Buddy Nix and Chan Gailey era in Buffalo is officially underway.

In true Bills fashion, the new regime kicked off its campaign with controversy after selecting Clemson running back C.J. Spiller with the 9th overall pick.

While most Bills backers have criticized the pick and threatened to burn their season tickets, I give the new front office a round of applause.

The 5-foot 11-inch Florida native is a top five talent that fell into Buffalo's lap. Nix and company didn't listen to the public and weren't influenced by draft experts. They ignored the mock drafts and targeted the player that they felt will best fit Gailey's offense and help the team win.

Spiller is exactly what the Bills' anemic offense needs to help get its feet out of the mud. He brings unique versatility and has explosive playmaking ability to be a threat to score every time he touches the ball. Whether it is out of the backfield, lined up as a slot receiver or returning kicks, Spiller will give defenses a headache preparing for Sunday afternoon.

His career at Clemson was nothing short of spectacular. Spiller set the FBS record for kickoff return touchdowns with seven and is only one of five players in history to gain 7,000 all-purpose yards in a career.

In 2009, the All-American was named the ACC Player of the Year after finishing with 1,212 rushing yards for 12 touchdowns and 503 receiving yards with four scores. He was the only player in the FBS to score a touchdown in every game of the 2009 season and the lone player to score in five different ways – rushing, receiving, passing, punt return and kickoff return.

I'm fully aware that running back wasn't a glaring need. In fact, it was the one position on the roster that seemed to be solidified. Fred Jackson emerged last year as a 1,000-yard rusher and Marshawn Lynch is a former Pro Bowler that can help Jackson share the workload.

But Jackson is 29 and overrated, while Lynch's off-field problems and character issues have seemingly written his ticket out the door.

Tailback is a position that Buffalo would have had to address in the near future. If you have a chance to get a franchise-caliber running back, then why not seize the opportunity and take one?

Buffalo ignored its need for a quarterback. It passed on Jimmy Clausen and turned away from Colt McCoy. It lost out on the Tim Tebow race and opted to avoid Tony Pike and Dan LeFevour.

But I'm OK with that.

As much as I would've loved to have seen Clausen under center, the Bills' decision to stick to the Edwards-Fitzpatrick-Brohm trio is fine by me.

Let's face the facts. Buffalo is not going to be a good team in 2010, regardless of who was drafted in whichever position. It is an organization in re-building mode and has a lot of issues to focus on for years to come.

I recognize that patience has run dry with Bills fans. Western New Yorkers want a winning team, and they want it now.

But it's just not going to happen overnight.

Nix and Gailey didn't sign a three-month trial contract. They are here for the long run and are building for the future.

I'm confident that Nix and Gailey can get the job done. It's not going to be immediate, but in due time, Bills fans will get the winning team that they've yearned for.

After all, Nix's first draft choice during his time in San Diego was LaDainian Tomlinson.

He didn't turn out too shabby. 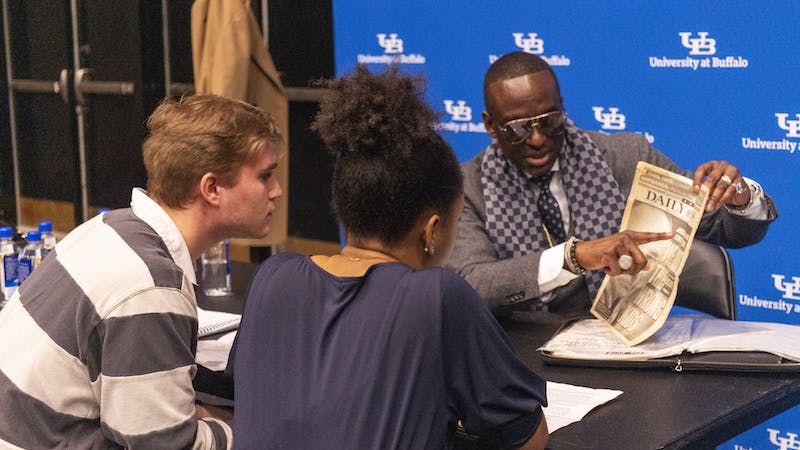 By NEIL KAVANAUGH
5 days ago

By ELIZABETH NAPOLITANO
9 days ago