When Zach Maynard, former starting quarterback of the football team, left Buffalo earlier this year and transferred to play for the California Bears, many questions arose surrounding his reasons for departure.
The picture has become much clearer now.
According to an employee at drug-testing agency Quarry Diagnostics who wishes to remain anonymous, Maynard tested positive for nandrolone, an anabolic steroid commonly known as "Deca." The drug has been a popular choice in the past for athletes looking for a surefire – albeit illegal – way to bulk up.
According to the source, who administers drug tests daily at the Quarry Diagnostics lab in Clarence, Maynard came in for a routine drug test shortly after new head coach Jeff Quinn was hired to replace former head coach Turner Gill, who left for Kansas.
"I don't know why he came in for a drug test at Quest," said the source, who asked that he simply be referred to as Malcolm. "We've never tested NCAA athletes here as part of their official program."
Malcolm did speculate, however, as to why Maynard, who passed for 2,694 yards and 18 touchdowns last season, may have come in that day.
"Maybe he was trying to see if the steroids would show up, just in case the NCAA were to test him," Malcolm said. "Or maybe [Quinn] was testing his new players to make sure he had a clean team. But I don't ask questions. I was just doing my job."
The test results, which were obtained by The Spectrum, did not show that Maynard had taken any other illegal substances besides the nandrolone.
Members of Buffalo's athletic administration expressed shock and surprise at the behavior of their former teammate.
"I am deeply saddened and disappointed to hear of Zach's decision to use nandrolone," said Buffalo athletic director Warde Manuel. "Anabolic steroids are illegal and that is not the right example to set as a representative of this school, this community, and our football team. Zach needs to remember that there are kids out there who look up to him."
Manuel went on to say that Buffalo fans need not suspect any of the other Bulls to be involved with illegal steroid use.
"I value the contributions that Zach made to our team, but having said that, we're glad he's chosen to leave if that's the type of behavior he's exhibiting," Manuel said. "We run a good, clean, healthy program here at UB and we will continue to do so."
Students around the school were also surprised, but some offered possible explanations for Maynard's behavior.
"He was pretty [expletive] skinny," said Geoff Turner, a sophomore biology major. "I heard he lost in an arm wrestling match to the punter. That might have driven me to do steroids as well."
Senior political science major Horace Green conjectured that Maynard might know exactly what he's doing.
"Well, as a transfer student, he's not allowed to play for a year at Cal," Green said. "Maybe he's just trying to get as jacked as possible during his year off so he has a better chance of playing in 2011."
The California Athletic Department did not immediately return a phone call placed by The Spectrum.
Rumors have circulated about where Maynard may have gotten the steroids. A person with knowledge of Maynard's habits, who also wishes to remain anonymous, says that Maynard began acting strange a couple of months ago.
"It started when he was putting posters on his wall of Barry Bonds, Mark McGwire and Marion Jones," Maynard's friend said. "Then he started hanging around with the sketchy guys at the gym and watching Jersey Shore a lot. Before I knew it, he was putting needles in his ass."
Shortly after the news about Maynard surfaced, Jose Canseco announced plans for a new book, Maynard Exposed: In the Locker Room With Yet Another User. The book is expected to be published later this year.
Stay with The Spectrum for updates on this developing story.

We're just going to throw this out there. THIS ARTICLE IS A LIE. A BIG, FAT LIE! Nothing, with the exception of our advertisements, is real. Absolutely nothing. Not one single solitary thing is. If you believe any of it, we applaud you, but most importantly, we will pity your soul. Real news will be back on Friday. 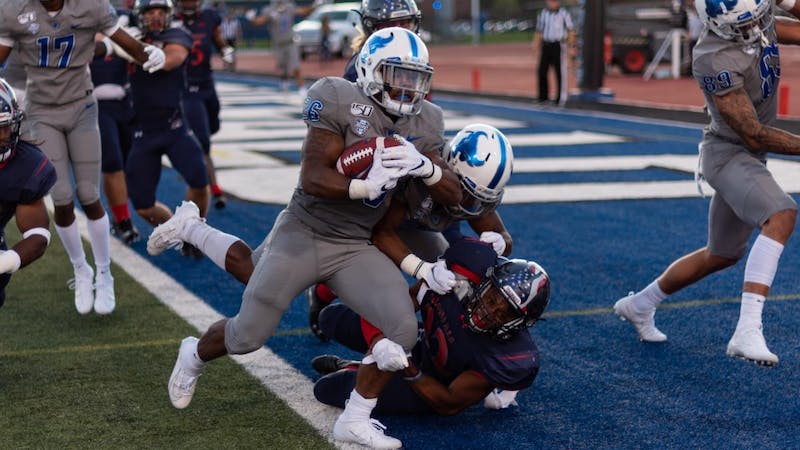 By EMILY BORJA
1 hour ago

By ANTHONY DECICCO
1 hour ago