Dennis Black should go to prison 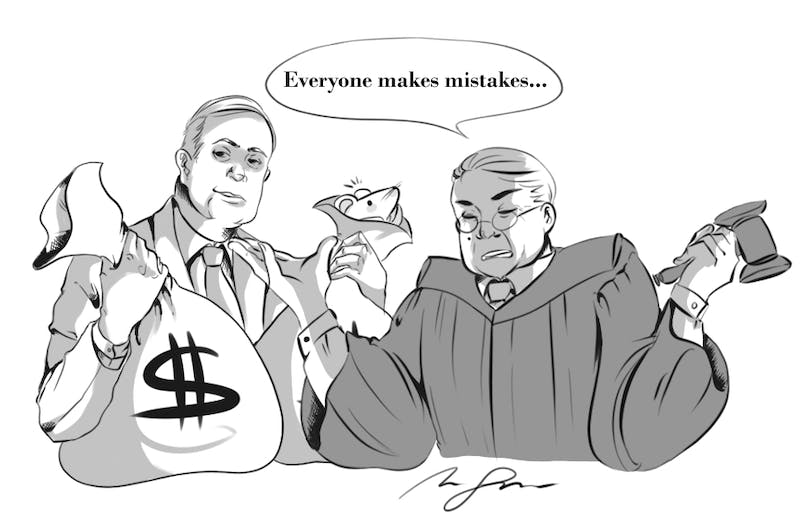 Dennis Black got an insultingly light sentence — a mere $5,000 fine and five years probation although the former vice president admitted to stealing more than $300,000 from UB student and faculty funds.

State Supreme Court Justice John Michalski’s Jan. 21 decision feels like a slap in the face. Black lied to us for years. He betrayed every integrity policy the university has. He left us angry that university administrators could be so negligent.

For months, we have harbored hope that he would be adequately punished. Again, we are disappointed.

Michalski told Black in court he thought he should serve at least a year in county jail, but the only sentencing options for Black’s felonies are state prison or probation. Many of us know people who’ve received prison sentences for crimes much less severe than Black’s. The Buffalo man who burglarized UB dorms last fall got three and a half years in state prison.

Black –– who made close to $300,000 a year –– funneled our money into a private account. He paid for his son’s bachelor party with our money. He bought concert tickets, went to Yankees games and took tax breaks on charitable donations he made with our money.

Those crimes are felonies. But they are also huge moral lapses that occurred over years, not in a single moment of recklessness or stupidity. Black relished his role as the face of UB. But beneath the veneer, he was calculating, conniving and deeply dishonest.

Black’s attorney Brian Mahoney felt prison time would be too harsh given that Black has returned the $320,000 he stole and paid $14,664 to the New York State Taxation and Finance Department for falsifying tax returns. Plus, he argued, Black has no prior criminal record and received letters of support from dozens of people. The Spectrum was not able to obtain those letters.

We can’t imagine which administrators and community leaders would write for Black. We know he was beloved and had deep roots at UB and in the community. But no acts of charity or small kindnesses he may have done make up for the treachery he knowingly perpetrated. Again, we are disappointed to imagine anyone in Buffalo could continue to support Black.

In addition to his probation, Black must 2,500 hours of community service. Mahoney argues this is sufficient. He insists the “public humiliation” Black has endured is punishment enough for his crimes. Again, we disagree.

Black has made a new life for himself in an upscale beach community in South Carolina. His life sounds pretty good to an average undergraduate with thousands of dollars in student loans and an uncertain future.

For Black, crime does appear to have paid.

It is easy to recover from public humiliation when you have the luxury of escaping to an upscale condo in a private beach community almost 800 miles from where your crime took place. And any humiliation suffered by Black is certainly deserved.

Michalski’s sentence is beyond insufficient, and we are deeply disappointed in his decision.