What happened to Dr. B? 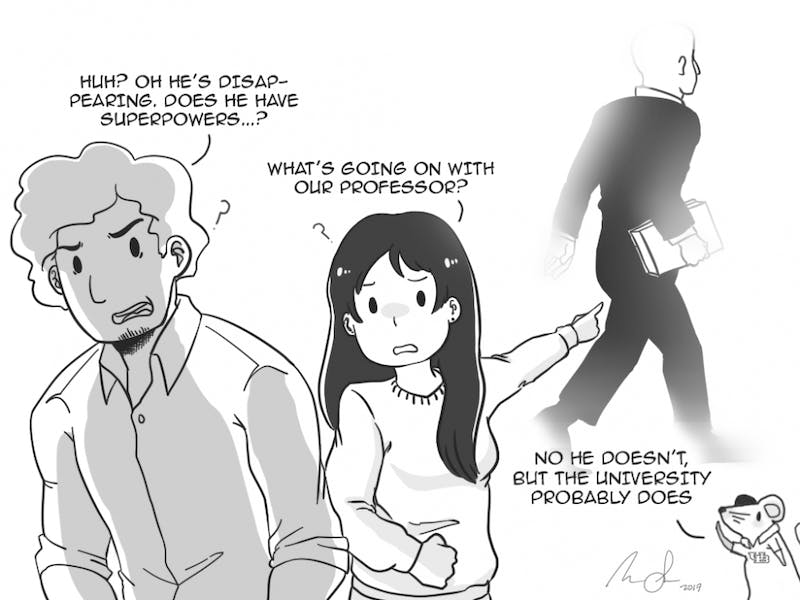 UB removed popular African-American studies adjunct professor Kushal K. Bhardwaj from his classroom of 90 students two-thirds of the way through the semester. Over two weeks, students heard rumors of why “Dr. B” had not shown up for class and then, on Oct. 17 his students met their new professor.

The class, students say, is fundamentally different now than when Bhardwaj taught it. Yet, they can’t resign without facing a penalty.

UB has yet to explain what happened.

Bhardwaj, an outspoken personality who formed tight connections with students and who has worked at UB since 1998, disappeared from the classroom.

The university says he wasn’t – as The Spectrum initially reported – fired.

He’s still a UB employee and will be paid until the end of the semester to complete an “alternate work assignment,” according to Tara Singer-Blumberg, a union representative.

But Singer-Blumberg wouldn’t say what the alternate work is.

UB has taken Bhardwaj from the class he was contracted to teach.

So what is he doing?

The university won’t say. Neither will Bhardwaj.

Student and UB sources told The Spectrum his removal from teaching occurred because he allegedly spoke to a student in an offensive and combative manner.

But students also told The Spectrum that his combative, no-nonsense manner is what has made him such a popular teacher and a regular student’s-choice award winner.

UB rightly and prominently demands academic honesty of its students. Yet UB is being dishonest by not telling students why Bhardwaj can’t teach. UB owes all students, but particularly the ones in Bhardwaj’s class, an answer.

UB also owes all adjunct and untenured faculty and staff an answer. Anyone whose job is not secured needs to know what conduct is and is not allowed in class.

Bhardwaj is not the only professor known for being controversial and for openly debating and challenging students in class. Do other outspoken professors – some of whom are also adjuncts or untenured – need to censor themselves or worry about their jobs?

If Bhardwaj’s conduct was inappropriate, UB owes it to faculty and students to explain what line he crossed so others don’t repeat it. We are not asking UB to release confidential information. We are asking administrators to be accountable and forthright about their actions. Students are shaken by the change. They deserve to understand why it happened.

If the confrontation that led to Bhardwaj’s removal took place in his classroom, UB should tell the 90-plus students what was inappropriate about what they saw. It could serve as a learning experience for what is and is not appropriate conduct. Instead, students feel confused, distrustful and angry at the university for hijacking their class without explanation.

UB has had an unsettling pattern of late.

Professors and officials keep disappearing without warning. This semester, Marc Böhlen former Department of Media Study chair, suddenly stopped being chair. The administration is perpetuating a pattern of secrecy by not offering an explanation.

We know administrators have reasons for what they do. We also understand that laws constrain what they can release. Still, we humbly ask that they trust us more and give us more information. As students at a public university, we should know why our professors and administrators are removed. We shouldn’t walk into class in the last part of the semester and find a stranger teaching us an entirely different curriculum.

A significant part of our education is learning by example from university leaders. Right now, our leaders are teaching us to obscure and hide the truth as much as possible. We deserve more.