An attempt by a UB aerospace engineering professor to explain a basic concept may someday lead to a Bulls quarterback training with computer-analyzed passes.

William Rae, a SUNY Distinguished Teaching Professor at UB, is currently in the process of extracting data from wind-tunnel tests performed on one of Buffalo's most ubiquitous fall items: a football.

"I came to it by the back door," said Rae. "I'd been teaching a flight dynamics course, and trying to explain what happens during the flight of a missile to students ... I thought, 'Well, here's a good educational loss leader, here's a way for them to learn flight dynamics.'" While preparing for his classes, Rae discovered that there existed no previous aerodynamic studies on footballs, and set about gathering as much information as he could about the projectile.

Footballs create a considerable challenge over golf balls or baseballs or any other game, as the football is not cylindrical and is thrown in a very specific way, according to Rae. For every ounce of influence put on the ball, from left or right-handed quarterbacks with slightly different throwing arcs, the ball's motion changes around 32 times that amount.

"It's explained like the kid's toy, the gyroscope," said Rae. "Anytime you spin something, it becomes a gyroscope, and responds pretty wildly to whatever you do to it."

After making a few calls to the NFL to determine the specifications of an official football, Rae was put in contact with Wilson Sporting Goods, who are now partially funding Rae's study. Working with fellow engineering professors Baruch Lieber and Christina Bloebaum, Rae also obtained a delicate piece of equipment, a strain gauge balance, necessary for further studies.

Along with wind-tunnel studies, Rae and student researchers (including some seniors basing their final design project on the study) have been working on a frame-by-frame analysis of a pass from a 1976 Dallas Cowboys and New York Giants game. "It was the cheapest thing I could find at the store," said Rae, "Dallas tapes sell very cheaply in Buffalo I found out."

Rae hopes that his research will lead to the possible development of a training simulation, where a player could throw a ball into a net (much like a golf swing analysis), and have the launching conditions analyzed by computers. Although none of the UB Bulls' coaching staff or players have been involved, "[Coach Jim] Hofher and [quarterback Joe] Freedy are coming over to look at the project, as soon as they have time in their schedules."

What Rae has recently discovered is that he may have been pre-empted by football legend Vince Lombardi, former coach of the Green Bay Packers. "I've learned that the great Vince Lombardi was aware of exactly this kind of curvature ... he taught physics and coached at the Army academy, and I've heard that he was using the data on shelling schematics to teach his quarterbacks how to throw differently, to lead their receivers a certain way," said Rae.

"What I'd like to do is see the NFL re-create this training that Lombardi had."

Rae's research is being conducted at the Calspan-UB Research Center, a non-profit venture of UB and Veridian Corp., who also funded the studies. 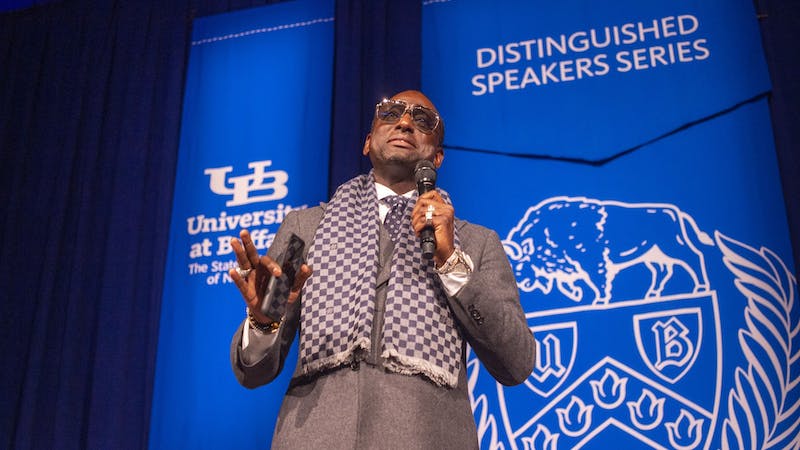