Students should care about who controls $4.4 million in student funds 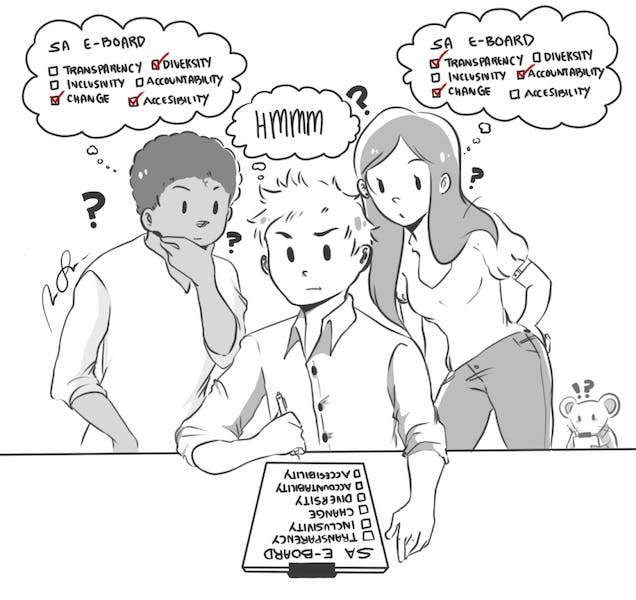 SA President Leslie Veloz has not been logging enough office hours and recently nominated an unqualified candidate for vice president. While her presidency will be ending after this school year, her failure to fulfill some of her responsibilities highlights why students need to not only vote in SA elections, but also make sure they are picking a qualified candidate.

Veloz is supposed to have 17 to 21 office hours per week, but only has 12 scheduled.

These hours were lower when we first asked to see the timesheets. Veloz said in an email this discrepancy happened because she forgot to clock in for certain office hours and fixed the error once we spotted the low number of hours.

After we questioned her hours, Veloz held a special staff meeting on “transparency” –– which The Spectrum was barred from attending.

Veloz has harped on transparency; it was one of her biggest campaign platforms.

But we question how transparent a president who fails to meet office hour requirements does not allow the press to attend a meeting purportedly about transparency.

Veloz said she had to cut back on office hours this semester due to an increased credit load. Last semester, she took 12 credits to help her ease into her new position, but to make up for that, she has to take 21 credits this semester.

While we understand what it’s like to have demanding course loads and know academics should come first, her decision reflects poor planning and organizational skills. By taking a below-average course load during the fall semester, she had to take on an above-average course load for the spring. As a result, her work performance is suffering. It would have made more sense to divide up those credits over two semesters.

Roughly 20,000 undergraduates are enrolled at UB, yet only 2,535 students voted in last year’s SA e-board elections. Treasurer Janet Austin ran on a separate ticket from Veloz and was elected by just 15 votes. With so few students voting in SA elections, your voice holds tremendous power.

UB undergraduates pay a $104.75 student activity fee each semester. The money goes directly to the Student Association’s $4.4 million budget, which is managed by the SA e-board. Students should care about who is in charge of their money. But too often, SA e-board elections are decided based on popularity rather than merit.

Last year, Veloz was vice president of Black Student Union, UB’s largest undergraduate club. She ran on soft promises of “transparency” and “diversity”; her platform lacked concrete initiatives, other than hiring more female and minority faculty. While hiring more diverse faculty is a noble goal, it’s a vague promise that almost anyone can get behind. And it’s not really something within the SA e-board’s purview.

Veloz was one of the few candidates without prior SA experience on the administrative or legislative side, but she said this was a good thing.

“I’m the VP of the largest minority club. … We’ve all been supporting and been involved with and on the receiving end of the student experience so we can really relate. We already have a relationship with our student body, so now we want to advocate for them on an administrative level,” she told The Spectrum during her campaign last year.

She made it so the SA president can e-mail the entire student body; she made Fall Fest more “student oriented” by including student acts; she said she meets with President Tripathi monthly; she conducted a survey which found 25 percent of UB students are food insecure and she is now advocating for an on-campus food pantry as a result. And she is currently conducting a survey with the Graduate Student Association and Intercultural Diversity Center to find out if students feel UB is inclusive and diverse enough. The results will help the next e-board gauge student needs, Veloz said.

We believe Veloz’s heart is in the right place, but we just don’t know that she was the right fit for the role of president. While experience on an SA club e-board is valuable, this background is more appropriate for a prospective vice president, as vice president oversees SA clubs. Someone in the executive position, on the other hand, should have administrative or legislative experience with SA.

If Veloz cannot meet office hour requirements and is showing up to meetings late, her leadership skills are questionable. If she cannot nominate a vice presidential candidate who is qualified, her judgment is questionable. After Vice President Redfern to step down for personal reasons, Veloz nominated her friend Samirra Felix, who lacks sufficient SA experience and couldn’t even name the seven councils the vice president works with.

Last year we went with an outsider for SA president, and this was the result. Students should take the time to research candidates and make sure they have the right experience and qualifications in the future.

This is our school and our money. When we’re apathetic, unqualified candidates end up in high-ranking, highly paid positions.

Veloz’s missteps serve as a lesson about the importance of voting in SA elections. Students need to care, and they need to show up to make sure we do not repeat the same mistake. We urge students to make their voices heard during the elections for next year’s e-board, which will take place March 27 to 29.

By JACKLYN WALTERS
18 hours ago