Professor Campbell talks about Monday's debate and its implications

"The president was more aggressive in the debate, but in terms of really helping win the election, I think both helped themselves about equally," Campbell said. "Because that question about who are you more likely to vote for after seeing it, that was about dead even."

In fact, the CNN poll found little impact on swing voters, 24 percent of whom said they were more likely to vote for Obama and 25 percent for Romney.

In past elections, the undecided voter poll was linked closely to the election's outcome, according to Campbell.

The two candidates sat across from each other during Monday's third and final debate on foreign policy at Lynn University in Boca Raton, Fla., one of the key swing states in the election.

The table setting didn't stop Obama and Romney from aggressively disputing America's role in the world, its war in Afghanistan, changing the Middle East, the new face of terrorism and the rise of China. The overriding issue of the foreign policy debate, which some students criticized the candidates for, was the American economy.

Campbell said the most interesting part of the debate was how similar Obama and Romney's views are on foreign policy.

Both reaffirmed America's alliance with Israel and took hard positions against the Iranians getting nuclear weapon capabilities. Both took a position of the use of force as the absolute last alternative; neither was "hawkish" in that respect, Campbell said. He explained Romney differed a little more when he emphasized fostering governments in the Middle East and helping Middle Easterners reject radical Islamic appeals.

Obama said the Middle East can govern itself, which highlighted his "peaceful foreign policies," according to Lauren Carrow, a senior psychology major.

"Overall, I think Obama was successful in portraying Governor Romney as more of a war hawk, willing to spend money to expand the army, which many voters may equate with added spending that we can't afford," Carrow said.

Joseph Freiert, a freshman math major, said Obama's plan in handling Libya and Syria isn't "getting us much progress."

"I like how Romney wants to make sure we keep our allies in the area and make sure they are armed," Freiert said. "[Our allies] have our support if they do decide to act, so that we don't lose funds over there that we desperately need for our oil resources to try to make that place more stable."

While some students criticized the candidates for spending so much time on the American economy - discussing topics like Obamacare, Romney's 5-Point Plan and job creation - Campbell said it was relevant. The overriding issue of the election is the economy, according to Campbell.

He said the economy affects the United State's posture toward its ability to deal with foreign policy, and in many ways foreign policy is about the economy. He also said the country is in a stronger position in almost every respect if it has a prosperous economy.

"At least Obama can rationalize how he plans to bring jobs to America, giving concise examples like investing in alternative energy and rewarding domestic job providers," said Stephen Denny, a sophomore chemical engineering major. "He wants to expand the manufacturing industry and provide employment to more Americans."

Campbell's biggest concern about the debate was the candidates' failure to fully address the terrorist attack in Libya.

"I thought it was fascinating that it did not make an appearance throughout the whole debate," Campbell said. "And I think it requires explanation for why it wasn't part of the debate."

He said so much was devoted to the Middle East and then almost nothing was said about Europe's economic problems.

Either way, both campaigns are seeing the race narrow. CNN said: "Americans will wake up on Election Day not knowing who their next president will be."

Campbell thinks the first debate went decisively to Romney and helped change the course of the campaign. The second and third debates were draws, although Obama had slight wins in both cases.

But in terms of "what really matters," the debates were draws - which Campbell said makes it anybody's game. 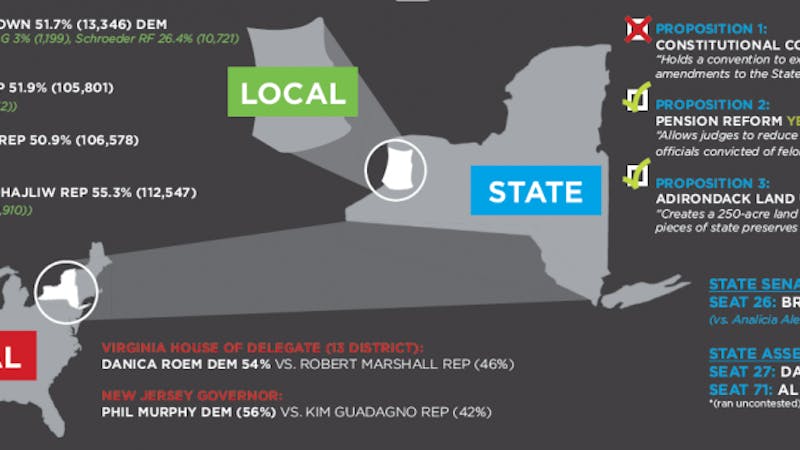 Election day 2017 seen as a win for diversity

By SARAH CROWLEY
870 days ago

Nine months in office: A look at President Trump's impact

By SARAH CROWLEY
877 days ago

A guide to the local ballot

By MADDY FOWLER
877 days ago

By SARAH CROWLEY
877 days ago