On Sept. 2, a student's iPhone was stolen out of her hand while she was walking off a South Campus bus stop.

On Sept. 9, three men jumped a student after he refused to give them his wallet in a South Campus parking lot.

On Sept. 15, 20 individuals jumped two students, who were walking back to their South Campus home.

There have been numerous criminal instances around South Campus since the semester started.

SA Treasurer Justin Neuwirt was fed up after the Sept. 15 incident, which occurred on his block; one of the students jumped was his close friend. He had seen too much crime around South Campus during his years at UB and not enough effort to find any solutions.

Neuwirt called the meeting to implement changes in University Heights, increase safety and security in South Campus and collaborate various UB representatives to take steps forward in fixing what he says is the biggest issue at UB.

"My main point is if UB wants to expand and build all these great buildings and gain the national reputation that it's currently gaining, I'm all for that ... but the first thing or one of the most important things should be tackling this issue on South Campus," Neuwirt said.

The main ideas generated were: increasing lighting in University Heights; modifying the party registration process; finding new approaches to communicate with temporary and permanent residents; and improving communication between students and the Buffalo Police.

Neuwirt said, from what he sees in University Heights, students avoid cops instead of communicating with them.

This week, Ryan will begin taking steps toward increasing the lighting in University Heights to keep the blocks highly visible. He and a city inspector will identify where trees are blocking the streetlights.

Ryan also wants to give students in the surrounding South Campus blocks free light bulbs. He wants to find bright bulbs that won't be costly to students' electricity bills and encourage them to leave their porch lights on.

The inner fraternity council suggested modifying party registrations by only mandating the student who is throwing to party to give his or her first name, not last name.

"I'm willing to make changes to [party registrations] so they can be more effective," Ryan said.

Off-Campus Student Services implemented party registrations 18 months ago. Since then, students have registered approximately two dozen parties, according to Ryan.

If students register their party and it is reported, the police will warn the students before they come break it up. This way, the students have time to get everything under control.

"If the students don't register the party, the police are a bit more aggressive and give misdemeanors and warnings," Ryan said.

When Neuwirt told the two Buffalo officers at the meeting students are afraid of them, they responded by saying when they deal with students, it is at "the worst time" of the students' lives. The students are in danger, and the police are only thinking of how to help. Many students are drunk or unwilling to listen.

Neuwirt said the meeting allowed different representatives at UB to see various perspectives of the issue. He now wants to move forward by meeting with individual groups.

"In meetings in the past, people go in with a finger-pointing attitude," Neuwirt said. "My goal of this meeting and future meetings is that we cut that nonsense out and begin to work together. I think there's a lot of good ideas being passed around back and forth, but now that we had the meeting with everybody, I think us as student leaders, the students that attended that meeting, need to sit down with each entity and talk to them one on one."

Ryan said there was a similar meeting held a few years ago. It resulted in a collaboration with the BPD and UPD in increasing patrols in the surrounding streets of South Campus.

Neuwirt said if there's hard evidence crime is occurring, regardless of whose fault it is, it must be tackled in a collaborated effort.

BPD Spokesman Michael J. DeGeorge said crimeoverall in the university district hasn't been particularly high compared to past years, besides two incidents in early September that could be tied to fraternity rivalries. 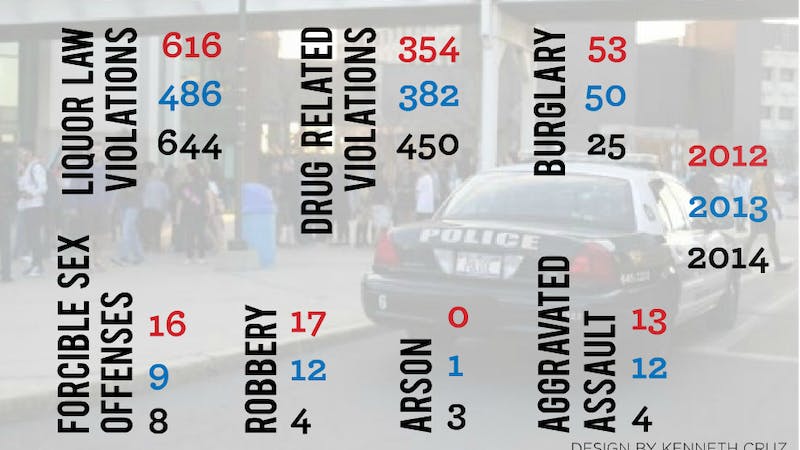 By MARLEE TUSKES
1699 days ago

By JOHN NASSIVERA
2608 days ago